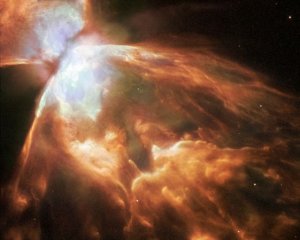 The Bug Nebula (NGC 6302) is a planetary nebula in the constellation Scorpius with a double-lobed structure that has resulted from a bipolar outflow. The extremely high rate of expansion (nearly 400 km/s) and the high concentration of ionized iron in the nebular gas suggests that the material making up the Bug was ejected with unusual violence. The Bug also stands out for being one of two objects (the other is the Red Spider Nebula) in which carbonates were first found that have no links with liquid water. The discovery, using the Infrared Space Observatory, of large amounts of calcite and dolomite in these clouds, cast off by dying stars, breaks the automatic association between these minerals and an aqueous environment.