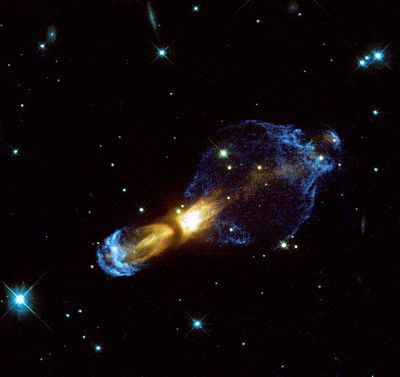 The Calabash Nebula (OH231.8+4.2) is a protoplanetary nebula (i.e., a very young planetary nebula) that lies about 5,000 light-years away in the constellation Puppis. It is also known as the Rotten Egg Nebula because of its unusually large abundance of sulfur compounds (hydrogen sulfide being the culprit for the smell of bad eggs).

The Calabash is made up of gas ejected by the central star and subsequently accelerated in opposite directions, at speeds of up to one and a half million kilometers per hour, to form a bipolar structure. Observations by the Hubble Space Telescope have shown how the gas stream rams into the surrounding interstellar material – an interaction that is thought to be preeminent in the formation of planetary nebulae. Due to the high speed of the gas, shock fronts are formed on impact, which heat the surrounding gas. Much of the gas flow seen today seems to stem from a sudden acceleration that took place about 800 years ago. Over the next 1,000 years or so, the Calabash is expected to evolve into a fully fledged planetary nebula.