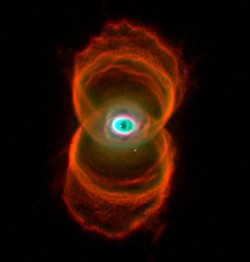 The Hourglass Nebula (MyCn 18) is a young planetary nebula that is about 8,000 light-years away in the constellation Musca, 1.5° SSE of NGC 5189. According to one theory, the hourglass shape of this object is produced by the expansion of a fast stellar wind within a slowly expanding cloud which is more dense near its equator than near its poles. What appears as a bright elliptical ring in the center, and at first sight might be mistaken for an equatorially dense region, is seen on closer inspection to be a potato shaped structure with a symmetry axis dramatically different from that of the larger hourglass. The hot (110,000 K), Wolf-Rayet (WR9) star which has ejected and illuminates the nebula, and therefore might be supposed to lie at its center of symmetry, is clearly off center. Hence MyCn 18, as revealed by the Hubble Space Telescope, does not fulfill some crucial theoretical expectations.

Hubble has also revealed other features in MyCn 18 that are new and unexpected. For example, there is a pair of intersecting elliptical rings in the central region which appear to be the rims of a smaller hourglass. There are the intricate patterns of the etchings on the hourglass walls. The arc-like etchings could be the remnants of discrete shells ejected from the star when it was younger, (as seen, for example, in the Egg Nebula), flow instabilities, or could result from the action of a narrow beam of matter impinging on the hourglass walls. An unseen companion star and accompanying gravitational effects may well be necessary in order to explain the structure of MyCn 18.

Note: part of the Lagoon Nebula (M6, NGC 6523) is also known as the Hourglass Nebula.