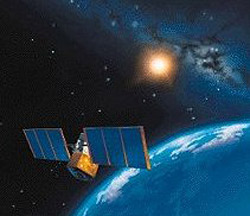 BeppoSAX (Satellite per Astronomia a raggi X) was a major project of ASI (the Italian Space Agency) with participation of the Netherlands Agency for Aerospace Programs. It was the first X-ray mission with a scientific payload spanning more than three orders of magnitude in energy – 0.1–300 keV – and has a relatively large effective area and medium energy resolution and imaging capabilities in the range 0.1–10 keV. During its six years of operation, BeppoSAX carried out nearly 1,500 observations of most types of cosmic ray sources and discovered more than 50 gamma ray bursts. It was shut down on April 30, 2002, and reentered Earth's atmosphere a year later. BeppoSAX was named for the Italian physicist Guiseppe "Beppo" Occhialini (1907–1993).