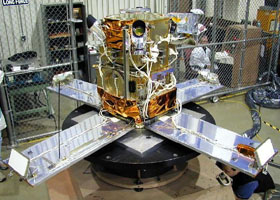 HETE (High Energy Transient Experiment) is a satellite whose main task is a multi-wavelength study of gamma-ray bursts using ultraviolet, X-ray, and gamma-ray instruments. A unique feature of the mission is its ability to localize bursts with an accuracy of several arcseconds in near real-time. These positions are transmitted to the ground and picked up by a global network of primary and secondary ground stations, enabling rapid follow-up studies.

The original HETE was lost following its launch on November 4, 1996, when it (and its co-passenger, SAC-B) failed to separate from the third stage of a Pegasus launch vehicle. However, the scientific importance and continuing relevance of the mission provided the impetus for the mission collaborators, including NASA, CESR (Centre d'Etude Spatiale des Rayonnements), CNES (the French space agency), and RIKEN (Japan's Institute of Chemical and Physical Research) to fund a replacement satellite. HETE-2 retains nearly all the original HETE design elements but carries a soft (longer wavelength) X-ray camera in place of the original ultraviolet cameras. Its main instrument is FREGATE, the French Gamma Telescope, a hard (shorter wavelength) X-ray spectrometer operating in the 6-400 keV energy range. This gamma-ray burst detector, together with a Wide Field X-ray Monitor, is used to trigger searches with the two Soft X-ray Imagers which have 33-arcsec resolution, thus giving astronomers precise locations of gamma-ray bursts and allowing detailed follow-up with optical instruments on the ground. The Massachusetts Institute of Technology operates the satellite, and the program is managed by the Goddard Space Flight Center as an Explorer Mission of Opportunity. HETE-2 was the first satellite to be launched from the US Army's Kwajalein Missile Range in the Marshall Islands.