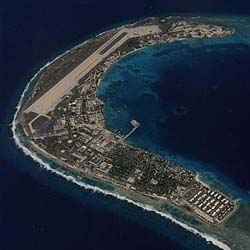 Kwajalein Missile Range is a US Army military range and launch site for missiles and, occasionally, small satellites, located on the Pacific atoll of Kwajalein in the Marshall Islands at 10° N, 168°. An air-launched Pegasus, carrying the HETE-2 gamma-ray observatory, became the first rocket to ascend to orbit from the range after its carrier plane took off from there in October 2000. The first intended ground-based orbital launch to originate from the Kwajalein base was a Falcon 1 rocket on March 24, 2006; however, the rocket was destroyed approximately one minute after take-off.