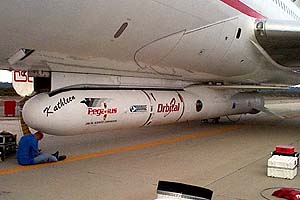 Pegasus is an air-launched space launch vehicle, developed by Orbital Sciences Corporation, that works in a similar way to an air-launched ballistic missile (ALBM). Like an ALBM, Pegasus is dropped from an aircraft and fires its rocket seconds later. But instead of completing a ballistic trajectory to carry a weapons payload to its target, Pegasus carries a payload into space.

The original vehicle, now referred to as the Pegasus Standard, has been superceded by the Pegasus XL which is available in three- or four-stage versions. There are two fourth-stage options. The Hydrazine Auxiliary Propulsion System (HAPS), which burns hydrazine liquid fuel, provides precision orbital insertion capability for the payload. Alternatively, the fourth stage can be powered by a Thiokol Star 27 solid rocket motor, which burns HTPB solid fuel and can provide Earth-escape trajectory capability for the payload. The Pegasus XL employs a standard payload fairing, 2.1 m long with a diameter of 1.1 m. This fairing is able to accommodate one payload in a dedicated launch configuration or two payloads in a shared launch configuration.

• Maiden 1990 mission marked the first all-new, unmanned space launch vehicle developed in the US in more than 20 years