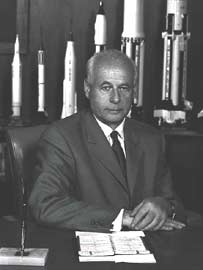 Eberhard Rees was one of the leading members of Wernher von Braun's V-2 rocket team. A graduate of the Dresden Institute of Technology, Rees began his career in rocketry in 1940 when he became technical plant manager of the German rocket center at Peenemunde. In 1945 he came to the United States and worked with von Braun at Fort Bliss, Texas, moving to Huntsville in 1950 when the Army transferred its rocket activities to the Redstone Arsenal. From 1956 to 1960 he served as deputy director of development operations at the Army Ballistic Missile Agency and then as deputy to von Braun at the Marshall Space Flight Center. In 1970 he succeeded von Braun as Marshall SFC's director before retiring in 1973.