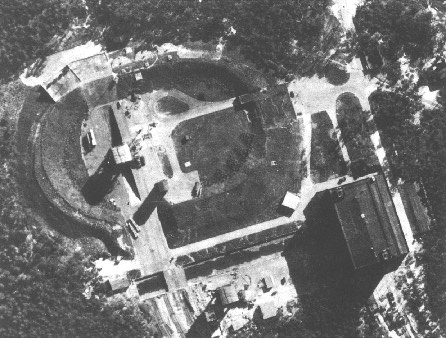 Peenemünde was originally, a quiet, wooded region in Germany located on the Baltic Sea at the mouth of the river Peene on the island of Usedom. It came to the attention of the German Army and the Luftwaffe in their search for a new rocket development site to replace Kummersdorf, having been suggested to Wernher von Braun by his mother. By the late 1930s, a massive construction project was underway involving new housing for engineers and scientists, a power plant, a liquid oxygen plant, a wind-tunnel facility, barracks, a PoW camp, a rocket production facility, a development works facility, and the Luftwaffe airfield. The site would eventually be home to over 2,000 scientists and 4,000 other personnel under the command of Walter Dornberger. To the northern end of Peenemünde, between the forest and the sandy foreshore, nine test stands for the firing of rockets were constructed, the largest and most infamous of them being Test Stand VII from which the A-4/V-2 was eventually launched.

Eventually, Allied intelligence became aware of the importance of Peenemünde and on the night of August 17/18, 227 bombers from the RAF were ordered to attack the site. The objective of Operation "Hydra" was to kill as many German rocket scientists as possible and destroy key targets such as the liquid oxygen plant, the power plant, the Experimental/Development Works, and the test stands. The Peenemünde West area was ignored because the Allies didn't know of the V-1 flying bomb development there. In the event, the bombing left 732 people dead and much of the facility undamaged. But the vulnerability of Peenemünde was now evident and the remaining field trials of the V-2 were carried out at Bliszna in Poland. Heinrich Himmler persuaded Hitler that production and deployment of the V-2 should henceforth be handled by the SS and a suitable site for mass production was found in the complex of tunnels beneath the Kohnstein Mountain near Nordhausen, in central Germany. This subterranean V-2 factory, in which PoW's were forced to work under brutal conditions, became known as the Mittelwerke.

Research into rocketry and rocket weapons continued at Peenemünde but on a much-reduced scale. The autumn of 1944 saw testing of the Wasserfall anti-aircraft missile, a winged version of the V-2 designed to carry explosives into the midst of Allied bomber formations where it would be detonated. At Peenemünde West development continued of the Me 163 "Komet" rocket-powered fighter plane along with the Me 262 jet fighter.