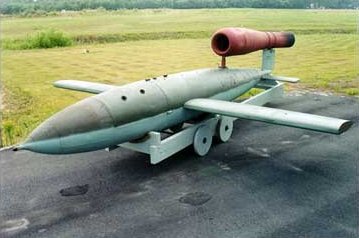 The V-1 was the infamous German flying bomb, known colloquially as the 'doodlebug' or 'buzz bomb', and officially as the Fieseler FZG-76. It was the world's first operational cruise missile – a small automatic airplane made almost entirely of thin welded mild-steel plate. Carrying a 900-kg warhead, it was launched from an inclined ramp using a steam catapult and powered by a pulse-jet engine, firing at 45 times a second, that propelled it to speeds of over 580 km/h and a range of over 320 km.

The engine (designed by Schmidt and built by Argus of Germany) consisted of a tube 3.66 m (144 in) long, with a maximum diameter of 58.8 cm (22 in), built of steel plate. On the inside, near the front end, was a grid bearing a number of flap-valves, which were the only moving parts. Nine fuel tubes projected from the grid into three Venturi mixing chambers formed by four louvre bars. The fuel tanks had openings of 0.16 cm (0.06 IN). The grid consisted of castings incorporating flap-valves, which contained 126 double rectangular leaves of very thin steel. Their inner edges were designed to press together, so that they formed non-return valves. When there was high pressure in the combustion chamber they automatically closed, but otherwise easily blew open when air rushed on them from outside.

The three nozzles above the top row of fuel jets were used when the engine was being started before launching. They received a supply of compressed air, which was injected into the combustion engine before launching. A sparking plug was fixed in the top of the combustion chamber, about 2.5 ft from the front. This was used to start the engine. When it was going, the current for the plug, and the compressed air supply, were disconnected.

The V-1 was flung into the air by a catapult at a speed high enough for the engine to sustain its run operation. Suppose the engine was in flight at full speed, and the valves were closed by the high pressure of gas in the combustion chamber, due to the burning of the fuel and air mixture. The pressure forced the burning mass of gas backward down the pipe, and it issued as a jet causing the engine, and hence the missile, to go forward by reaction.

When the pressure in the combustion chamber fell sufficiently, owing to the escape of the gases to the jet, the air pressure on the outside of the grid, owing to the V-1's rushing flight, was able to force the flap-valves open and stream into the combustion chamber. Fuel was pumped in at the same time, so a fresh explosive charge was produced, and ignited at the proper moment. A cycle of explosions was set going, at the rate of about 45 per second or 2,700 per minute. The succession of spurting jets produced an average thrust about equal to that of a 725-hp propeller aircraft piston engine. It consumed one gallon of fuel every 10 s – about the same as a 6,000 hp Lancaster bomber! The engine was therefore thermally very inefficient.

Far from being the simple device it appeared to be, the V-1 was equipped with magnetic compass, automatic pilot, and range-setting and flight controls. The missile was guided by an autopilot consisting of three gyroscopes, driven by compressed air. The master gyro controlled the rudder and elevator through air-driven servo systems, and the two secondary gyros damped out oscillations. The master gyro was helped to retain the steady direction of its axis by a magnetic compass. The height at which the missile flew was set by the autopilot mechanism.

In the tip of the nose was a little windmill. The was turned by the air to unwind a counter. When the counter was unwound to zero, the missile was thrown into a steep dive. This cut of the flow of fuel to the engine, which abruptly stopped. The charge in the head exploded on hitting the ground or obstacle.


The V-1 during and after World War II

Of the 10,492 flying bombs launched, 2,419 hit London. In July 1944, less than three weeks after the first V-1s struck England, American engineers began an extraordinary effort to reverse-engineer their own version of the buzz bomb. A working copy of the V-1, built largely from damaged components salvaged from English crash sites, was fired at Wright Field. Further tests of the missile took place at Muroc Army Air Base and contracts were let for production of 2,000 weapons, designated JB-2 (Jet Bomb-2) and nicknamed the Loon. After World War II, the JB-2 played a significant role in the development of other surface-to-surface missile systems – in particular, the Matador, Snark, and Navaho.