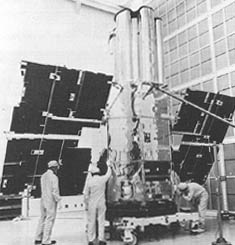 OAO-3 being checked out at Kennedy Space Center.

Orbiting Astronomical Observatory (OAO) was a series of large NASA astronomical satellites of which two, OAO-2 and OAO-3, were highly successful, and two, OAO-1 and OAO-B, were failures.

OAO-1 failed on Apr 10, 1966, two days after launch, when its primary battery overheated. Its replacement, known as OAO-B, was also lost, immediately after launch on Nov 30, 1970, when the Centaur nose shroud in which it was enclosed failed to open and the spacecraft tumbled back into the atmosphere.

OAO-2 made 22,560 observations over an operational lifetime of more than four years of objects both within the Solar System and beyond, and discovered a hydrogen cloud around Comet Tago-Sato-Kosaka and ultraviolet (UV) emissions from Uranus. Its instruments included seven UV telescopes and four large-aperture television cameras.

OAO-3 was renamed the Copernicus Observatory after launch in honor of the 500th anniversary of the birth of the Polish astronomer Nicolaus Copernicus (1473–1543). It involved a collaboration between NASA and the Science and Engineering Research Council of the United Kingdom. The main experiment on board was the Princeton University UV telescope, but Copernicus also carried an X-ray astronomy experiment for use in the 0.5–10 keV range developed by the Mullard Space Science Laboratory of University College London. It operated until late 1980.