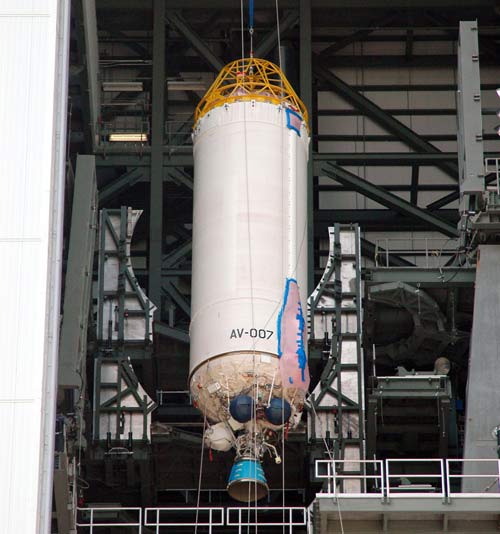 The Centaur upper stage of an Atlas V rocket being lifted up at Cape Canaveral.

The Centaur is a powerful upper-stage rocket that can be mated to an Atlas or Titan launch vehicle. It was America's first cryogenic rocket, running on a combination of liquid hydrogen and liquid oxygen, and was developed under the direction of Lewis Research Center. It first flew in 1962 and became operational in 1966 with the launch of Surveyor 1. Subsequently, it has undergone many improvements.

Until early 1974, Centaur was used exclusively in tandem with Atlas but was then adapted for mating to the Titan III to boost heavier payloads into Earth orbit and interplanetary trajectories. Today, when combined with the Titan IV, it makes up the most powerful expendable launch vehicle in the world.

The Centaur is manufactured by Lockheed Martin and powered by two restartable RL10 engines, designed by Pratt & Whitney Aircraft. It interfaces with the payload via a forward adapter where the avionics, electrical, flight termination, telemetry, and tracking systems are mounted.