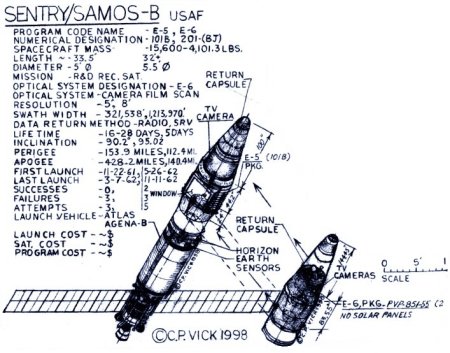 Samos was a series of American military spacecraft launched in the early 1960s to carry out global television surveillance from polar orbits. Samos (originally known as Sentry) satellites were one component of the first generation of United States Air Force orbital surveillance spacecraft, the other two components being MIDAS and Discoverer.

The first satellites in the Samos series radioed back images from a frame readout camera as they passed over North America; later ones carried recoverable panoramic cameras. None of the satellites worked well, in contrast to the successful CIA-run Corona project, and Samos was quietly wound up without any significant achievements. Some reporters have incorrectly said that "Samos" was an acronym of Satellite and Missile Observation System. In fact, the name came from the link with MIDAS – Samos being the island upon which King Midas lived.