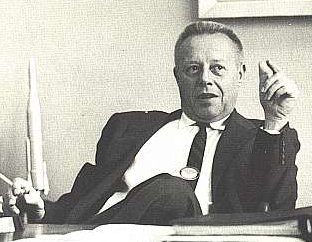 Karel Bossart was a Belgian-born engineer who emigrated to the United States before World War II and became involved in the development of rocket technology at Convair Corp. In the 1950s he was largely responsible for designing the Atlas with a very thin, internally pressurized fuselage instead of massive struts and a thick metal skin.