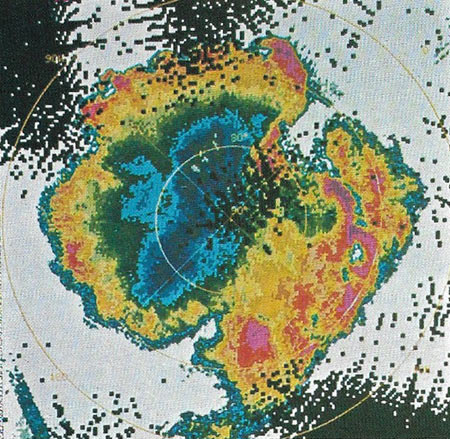 Antarctica and the surrounding ocean are clearly recognizable in this false-color view based on measurements from the Nimbus 5 satellite. The colors represent the intensity of the microwave radiation from Earth's surface at a wavelength of 1.55 centimeters.

Nimbus was a series of seven NASA weather satellites, launched between August 1964 and October 1978 into polar orbits, which photographed cloud cover and monitored air pollution. It followed the first generation of US meteorological satellites known as TIROS. Nimbus helped develop the technology that would be used in later meteorological programs.

The name "Nimbus" is the meteorological term for precipitating clouds (from the Latin for "rainstorm" or "cloud"). It was suggested in late 1959 by Edgar Cortright, Chief of NASA's Advanced Technology Programs, who directed the formation of NASA's meteorological satellite programs, including Nimbus and TIROS.