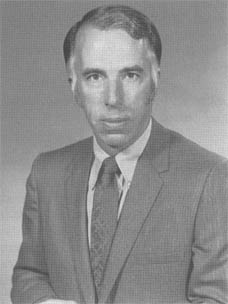 Edgar Cortright was an influential NASA official during the era of the first planetary probes. He earned an MS in aeronautical engineering from Rensselaer Polytechnic Institute in 1949, the year after he joined the staff of Lewis Laboratory (now known as the Glenn Research Center). His research at Lewis involved the aerodynamics of high-speed air induction systems and jet exit nozzles. In 1958 Cortright joined a small task group to lay the foundation for a national space agency. When NASA came into being, he became chief of advanced technology at NASA Headquarters, directing the initial formulation of the agency's meteorological satellite program, including projects TIROS and Nimbus. In 1960 he was appointed assistant director for lunar and planetary programs, supervising the planning and implementation of such projects as Mariner, Ranger, and Surveyor. He became deputy director and then deputy associate administrator for space science and applications in the next few years, then, in 1967, deputy associate administrator for manned spaceflight. The following year he took over as director of the Langley Research Center, a position he held until 1975, when he went to work in private industry, becoming president of Lockheed-California in 1979.