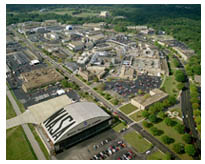 Glenn Research Center (GRC), previously called the Lewis Research Center, is NASA's leading center for research and development of aerospace propulsion systems in all flight regimes from subsonic to hypersonic. GRC also carries out research in fluid physics, combustion science, and some materials science, especially with regard to microgravity applications. Many Space Shuttle and International Space Station (ISS) science missions have an experiment managed by Glenn, and the Center has designed power and propulsion systems for spaceflight in support of the ISS, Mars Pathfinder, and Deep Space 1. In addition, Glenn leads NASA's Space Communications Program including the operation of the ACTS (Advanced Communications Technology Satellite).

Established in 1941 by NACA (the National Advisory Committee for Aeronautics), the Center was named after NACA research director George W. Lewis shortly after his death in 1948. Originally known as the Lewis Flight Propulsion Laboratory, the facility was renamed the Lewis Research Center upon becoming part of NASA when the Agency was founded in 1958. It was renamed again the John H. Glenn Research Center at Lewis Field in March 1999. Said NASA administrator Dan Goldin at the time: "I cannot think of a better way to pay tribute to two of Ohio's famous sons – one an aeronautic researcher and the other an astronaut legend and lawmaker – than by naming a NASA research center after them."