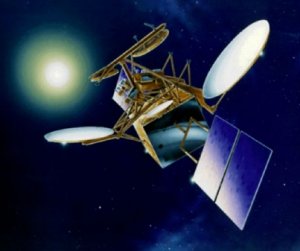 ACTS (Advanced Communications Technology Satellite) was an experimental NASA satellite that played a central role in the development and flight-testing of technologies now being used on the latest generation of commercial communications satellites. The first all-digital communications satellite, ACTS supported standard fiber-optic data rates, operated in the K- and Ka-frequency bands, and pioneered dynamic hopping spot beams and advanced onboard traffic switching and processing. (A hopping spot beam is an antenna beam on the spacecraft that points at one location on the ground for a fraction of a millisecond. It sends/receives voice or data information and then electronically "hops" to a second location, then a third, and so on. At the beginning of the second millisecond the beam again points at the first location.) ACTS-type onboard processing and Ka-band communications are now used operationally by, among others, the Iridium and Teledesic systems. ACTS was developed, managed, and operated by the Glenn Research Center.