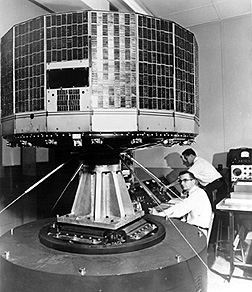 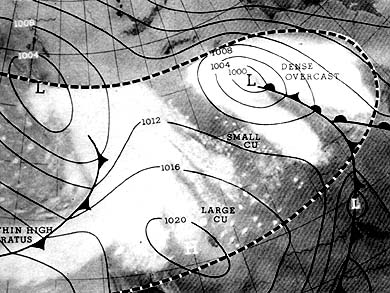 One of the first images returned (May 9, 1960) by TIROS-1. Superimposed on the cloud patterns is a generalized weather map for the region.

TIROS (Television Infrared Observation System) was a long-running series of polar-orbiting meteorological satellites. It began with 10 experimental spacecraft, TIROS 1 to 10, launched between 1960 and 1965, which represented the first generation of American weather satellites. These carried low-resolution television and infrared cameras, and were developed by the Goddard Space Flight Center and managed by ESSA (Environmental Science Services Administration). Then followed the TOS (TIROS Operational System) consisting of nine satellites with the ESSA designation. This gave way to the ITOS (Improved TIROS), beginning with TIROS-M and continuing with five satellites of the same design with the NOAA (National Oceanic and Atmospheric Administration) designation-NOAA having by this time absorbed ESSA and taken over management of the TIROS program. Further upgrades have come in the form of the TIROS-N, introduced in 1978, and the Advanced TIROS-N, introduced in 1984. See also Nimbus.