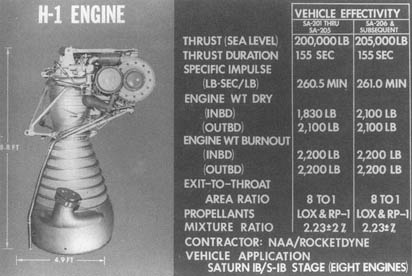 The H-1 was a liquid-propellant rocket engine, eight of which were used on the first stage of the Saturn I and Saturn IB launch vehicles. Employing liquid oxygen and RP-1 (kerosine mixture) as propellants, the gimbaled H-1 developed 830,000 newtons of thrust at sea level.

The H-1 resulted from a redesign, simplification, and modification of the S-3D, which was the Thor-Jupiter engine, by the Rocketdyne Division of North American Aviation. The first full-power H-1 engine firing took place in December 1958 at the Rocketdyne facility in Canoga Park, California. By April 28, 1959, the first production H-1 engine (H-1001) had been delivered on schedule to Army Ballistic Missile Agency. ABMA's first firing test of this engine, later used in the first test booster, was performed successfully on May 26, 1959.