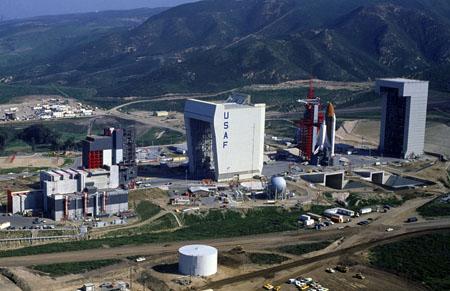 Space Launch Complex 6 at Vandenberg AFB. This photo shows the orbiter Enterprise being used to test out the facilities in 1985.

Vandenberg Air Force Base (VAFB) is the home of the Western Space and Missile Center, America's second major spaceport after Cape Canaveral. Vandenberg AFB lies about 240 km northwest of Los Angeles and is operated by the Air Force Space Command's 30th Space Wing. The base was established in the late 1950s as site from which ballistic missiles could be launched under simulated operational conditions. A Thor intermediate range ballistic missile (IRBM) was first test fired from here in December 1958. Since then Vandenberg has acquired pads and support facilities for launch other rockets including versions of the Atlas, Delta, Titan, and Scout. Because of its location, with open water to the south it is American's premier launch site for polar missions.


Vandenberg and the Shuttle

Vandenberg was also originally intended to serve as a launch center for polar Space Shuttle missions and construction of Shuttle launch facilities was begun. In fact, $4 billion was spent on what was called Space Launch Complex 6. However, further work on the complex was permanently halted after the Challenger disaster and the decision of the Department of Defense to use expendable launch vehicles for high-priority polar military payloads.