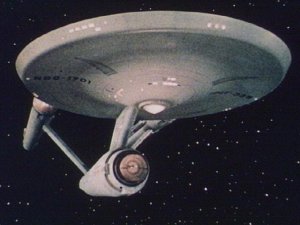 A starship is a large, crewed spacecraft capable of rapid interstellar travel. Starships are a mainstay of science fiction and are best known to most people through their ubiquitous appearance in Star Trek TV shows and films. The Starship Enterprise is perhaps the most famous spaceship never to have been built (yet!). Its primary means of propulsion is a form of warp drive involving matter-antimatter reactions.

Although immense scientific and technical obstacles need to be overcome before starships can become a reality, a number of theoretical schemes have been discussed by which travel close to or beyond the speed of light might be possible.


Journey of a lifetime

The main problem facing future interstellar voyagers is the immense distances between stars and the consequent inordinate lengths of time required to travel between even neighboring stars at speeds where relativistic effects do not come into play. For example, at a steady 16,000 km/s – over 1,000 times faster than any probe launched from Earth has yet achieved – a spacecraft would take about 80 years to cross from the Sun to the next nearest stellar port-of-call, Proxima Centauri. No astronauts embarking on such a voyage would be likely to live long enough to see the destination, unless they boarded as children. Volunteers might be hard to find. This problem of limited human lifespan and extremely long journey times led to suggestions, decades ago, of generation starships and suspended animation for deep space flight. However, such slow-boat techniques are very unlikely to be adopted in practice.

Einstein's special theory of relativity insists that there is a cosmic speed limit – the speed of light (c) – to which it is impossible to accelerate any object that has non-zero rest mass. To date, scientists have no reason to believe that this is not true. However, a variety of methods are well known and have been analyzed theoretically by which spacecraft could achieve a substantial fraction of the speed of light. The problems center not so on achieving these high speeds but on potential catastrophic damage through high-velocity collisions with even minor debris (such as cosmic dust particles) and slowing down at the other end (since any fuel to be used for deceleration adds enormously to the initial mass). On the other hand, the crew of a highly relativistic starship would enjoy the benefits of time dilation, potentially enabling them to reach even very remote locations within a reasonable amount of time as measured by shipboard clocks.

For more on some schemes and techniques proposed for achieving interstellar flight at substantial fractions of light speed, see:

Practical interstellar travel for humans will probably involve the development of some way of overcoming or sidestepping the light barrier. These enable some theoretical predictions of general relativity to get around the speed limit imposed by special relativity. The likeliest approaches to superluminal transport, at present, seem to be to (1) create some sort of "warp bubble," or locally flat region of spacetime, around the starship enabling faster-than-light travel with actually passing through all intervening points in normal, external spacetime, or (2) exploit artificial wormholes. New breakthroughs in physics, such as a theory of everything (unifying quantum mechanics and relativity theory), may open up possibilities for faster-than-light travel which are not presently conceivable.

Among the ideas that have been suggested for achieving greater-than-c travel are:


Among other concepts that may be relevant in the eventual construction of starships are: