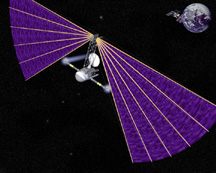 A space sail is a device that uses the pressure of sunlight, laser light, or some other form of radiated energy to propel a space vehicle in the same way that a sailing ship uses wind. It consists essentially of a large sheet of reflective material and a supporting framework to keep it extended and to transmit its pressure to the spacecraft. For more details of the basic principles involved and of the history of the concept, see solar sail.

For more distant voyages, to the edge of the solar system and beyond, including interstellar flights, there is the possibility of laser light sails (see also laser propulsion). Robert Forward and others have suggested propelling a star probe with a huge sail using highly focused beams of light from lasers which are powered by sunlight and in orbit around the Sun. As the craft approaches its target, part of the sail is cut free. The laser beams then push this section of sail ahead of the rest of the craft and are reflected back onto the parent portion of the sail from the opposite direction, slowing down the probe at its destination. Given sufficiently powerful lasers and a large enough sail, even a manned interstellar mission could be mounted on this basis.1

Recently, another variation on the space sail theme has been proposed: the magnetic sail, or magsail.2, 3 One form of this would be a loop of superconducting wire reeled out from a spacecraft in which a current was made to flow. Once started the current would continue cycling around the loop indefinitely because a superconductor offers no resistance. The magnetic field generated by the current loop would interact with charged particles in the solar wind to imparting momentum to the magsail and thus accelerate the spacecraft in the direction of the wind. At roughly the distance of Earth from the Sun, this would be sufficient over time for the magsail to reach speeds of several hundred km/s. Even more speculative are the diode sail, differential sail, and induction sail – three of the propulsion systems proposed by Mark Millis of NASA's Breakthrough Propulsion Physics program.