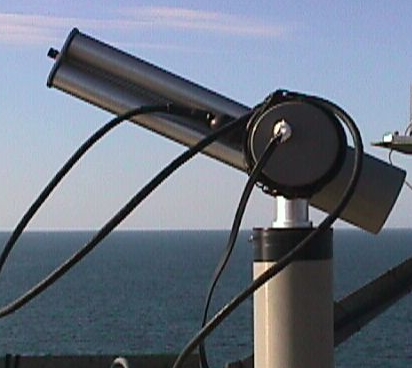 A photometer is an instrument for measuring the luminous intensity of light by comparing it with a light source of known intensity. Depending on the purpose, a variety of filters can be used to measure light of specific wavelengths. A photometer can also be used to measure ambient light, or only a narrow beam that comes directly from a source such as the Sun.

In astronomy, photometers are used to measure the brightness of stars or of other celestial objects. A photoelectric photometer records the electric current generated when light from a source falls onto a light-sensitive surface, kicking off electrons, which are then amplified into a measurable current by a photomultiplier. An area photometer, or imaging photometer, on the other hand, measures simultaneously the light intensity at each point of an extended object such as a nebula or galaxy using CCD detectors or an infrared array.

A spectrophotometer is a combination of spectrograph and photometer used to analyze a spectrum that has been recorded on a photographic plate. By passing a narrow beam of light through the recorded image the original intensity of light from the source at various wavelengths can be recovered. This information can then be displayed as a graph or stored as a digitized spectrum for further processing. Spectrophotometry is used for color comparison and in chemical analysis.