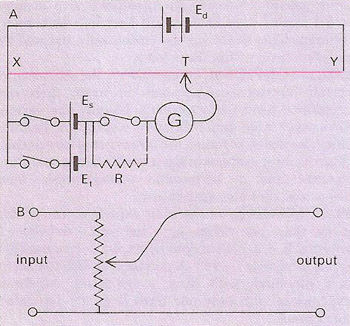 (A) A potential difference is set up along a resistance wire XY by a drive cell (Ed). The cell under test (Et) is switched into the circuit and the length of potentiometer wire required to zero the current through the galvanometer (G) is determined, first under the protection of the series resistance (R), and then without it. This process is repeated for a standard cell (Es) of accurately known emf. The ratio of the lengths of galvanometer wire tapped off then equals the ratio of the emfs of the cells when no current is flowing, that is, while non of the cell's power is expended in overcoming its internal resistance.

(B) The potentiometer (potential divider) as a voltage control device.

A potentiometer is a device for accurate measurement of electric potential by comparison with a standard cell potential. Numerous DC and AC variants exist, mostly depending on Ohm's law.

Typically, a potential drop is established in a long wire (fixed taut to a wooden base) by a battery, and a sliding contact used to tap a variable proportion of this drop, the lengths needed to balance the standard and unknown potentials being noted in turn. The ratio of these lengths is the ratio of the potentials. The same arrangement is also used to vary an applied voltage, for example, in the thin-carbon-film potentiometers used as volume controls in radios, etc.