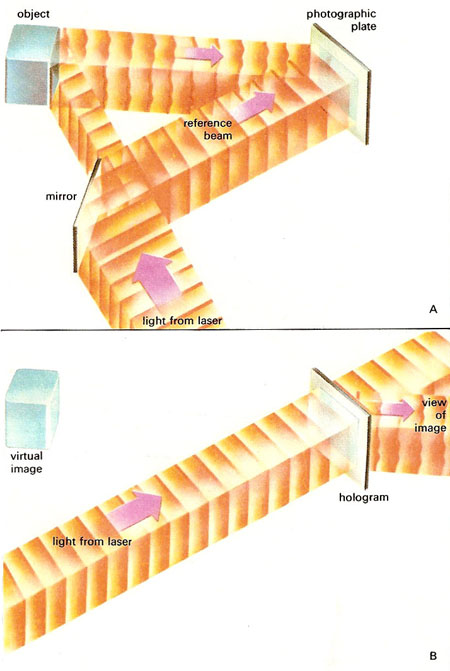 A hologram obtained by using apparatus so that laser light reflected from the objects travels about the same distance as the reference laser beam reflected onto the photographic plate by a mirror.

Holography is a system of recording light or other waves on a photographic plate or other medium in such a way as to allow a three-dimensional reconstruction of the scene giving rise to the waves, in which the observer can actually see around objects by moving his or her head. The resulting plate, or hologram, records the interference pattern between waves reflected by the scene and a direct reference wave at an angle to it; it is view by illuminating it from behind and looking through rather than at it. The high spatial coherence needed prevented exploitation of the technique, originated in 1948 by the Hungarian-born British physicist Dennis Gabor (1900–1979), until the advent of lasers.

Holography is increasingly used in measurement and inspection (e.g., for irradiated nuclear fuel rods either out of or in a working reactor, and, for security coding on bank cards) and for decorative or artistic artifacts. Color holograms are possible, and three-dimensional television may ultimately be feasible.