Ball and roller types of bearing. 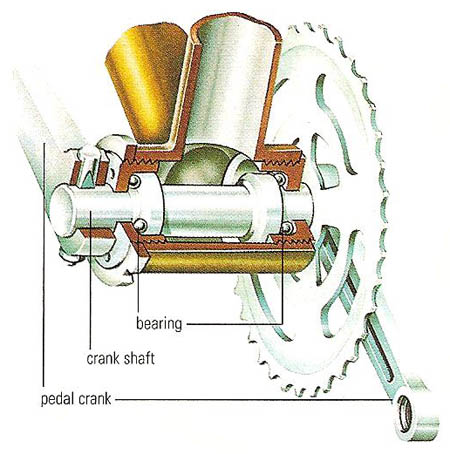 The bottom bracket assembly of a typical bicycle (shown here) must be very strong to stand up to the driving force of the pedals. The bearings are of the cup and cone type, the right-hand cup having a left-hand thread and the left-hand cup being adjustable. 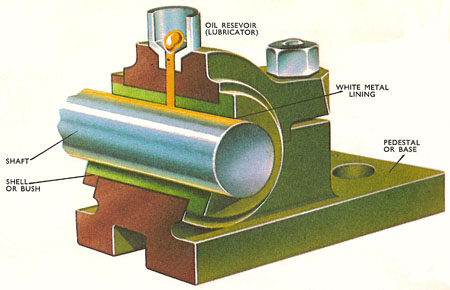 A bearing is a component of a machine, usually made of a resistant metal alloy such as steel or Babbitt metal (also called white metal), used to support and direct loads while minimizing friction between moving parts. The simplest type is the journal bearing in which a rotating shaft is supported in a hole in a fixed frame. The inner surface of the hole is usually lined with a bearing metal to reduce wear.

Friction and wear are also reduced by suitable lubrication. Lubricants, which include greases, oils, water, and even air, form a thin fluid film between the moving parts of the bearing. Whereas a pair of dry surfaces will bite into each one another, even if they are comparatively smooth, the presence of a thin film of lubricant between the stationary and moving surfaces enables the surfaces to float one on the other; the slight irregularities in one surface are kept clear of the imperfections of the other surface by the film of lubricant. Usually the motion itself is sufficient to form the film (hydrodynamic bearings) but sometimes the lubricant must be applied under pressure (hydrostatic bearings) as in air-lubricated dental drills.

A rotating shaft needs to be supported at, or close to, its ends. If it is long, additional supports or bearings may be needed at intermediate points as well. The simplest form of bearing, which is quite satisfactory if the speed is low and if the only forces acting on the bearing are perpendicular to the shaft, is the journal type. In this the shaft is supported by a close-fitting hollow cylinder called a shell or bush. As the bush may be subject to considerable wear, it is made so that it can be easily replaced in the bearing housing.

Lack of oil between the bearing bush and the shaft results in a considerable increase in the frictional forces acting between the surfaces. This, in turn, generates heat which causes the metal to expand and eventually the bearing to seize up. As serious damage to the machine would result from bearing seizure, it is usual to line the bushes of bearings with a soft alloy (typically Babbitt or white metal, as mentioned above) which has a fairly low melting point. In this way the bearing melts when it becomes overheated thus avoiding damage to the shaft or whatever the shaft is driving.

In order that the bearings do not have to be lubricated too frequently, it is necessary to incorporate into their design a means of holding a reserve of oil. This is usually done by having grooves cut in the surface of the bush, and also by having a small reservoir of oil above the bearing so that it can flow down and be distributed over the surface of the rotating shaft as it is required. There are sometimes great pressures acting between the bearing and the shaft, in which case lubricants have to be forced in under pressure.

More satisfactory bearings are the ball and roller types. In these the moving shaft and the fixed bearing housing are separated by balls or rollers, which run in grooves or races set in the surface of the shaft and the housing. The main advantage of these types of bearing over the journal type is that the sliding friction between the surfaces of the rotating shaft and the fixed bush is replaced by rolling friction between the balls or rollers and each of the two surfaces. The loss of energy in overcoming rolling friction is much less than that required to counteract sliding friction.

Ball bearings were first used towards the end of the nineteenth century and found favor in the constriction of the bicycle which was then becoming popular. In the original ball bearings the balls completely filled the space between the two races, but it is now usual to have the balls separated by a metal cage. This serves to keep the balls evenly spaced around the race and prevents uneven wear.

For these bearings to function satisfactorily, it is necessary that the balls or rollers and the races are from good quality hardened steel and that they are manufactured to a high degree of accuracy. In particular, it is most important that all the balls in one race are of the same size exactly.

In recent years dry (unlubricated) plastic bearings and self-lubricating bearings have been developed for applications where lubrication is difficult or undesirable.