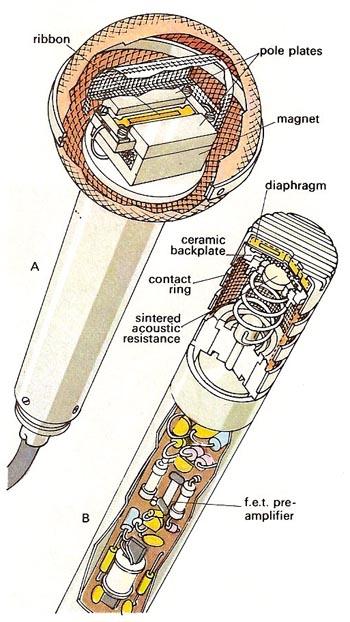 A microphone is a device for converting sound waves into electrical impulses.

The carbon microphone used in telephone mouthpieces has thin diaphragm behind which are packed tiny carbon granules. Sound waves vibrate the diaphragm, exerting a variable pressure on the granules. This varies their electrical resistance, so producing fluctuations in a DC current passing through them.

The crystal microphone incorporates a piezoelectric crystal in which pressure changes from the diaphragm produce an alternating voltage.

In the electrostatic microphone the diaphragm acts as one plate of a capacitor, vibration producing changes in capacitance.

In the moving-coil microphone the diaphragm is attached to a coil located between the poles of a permanent magnet; movement induces a varying current in the coil.

The ribbon microphone has, rather than a diaphragm, a metal ribbon held in a magnetic field; vibration of the ribbon induces an electric current in it.