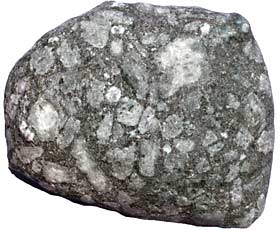 Dolerite, also called diabase, is a dark igneous rock intermediate in grain size between basalt and gabbro. Consisting of plagioclase feldspar and pyroxene, it is a widespread intrusive rock, quarried for crushed and monumental stone (known as "black granite").

Dolerite cools under basaltic volcanoes, like those at mid-ocean ridges. It cools moderately quickly when magma moves up into fractures and weak zones below a volcano. There, it forms dikes (tabular igneous rock bodies that cut across pre-existing rock layers or bodies) or sills (tabular igneous rock bodies that form parallel to pre-existing rock layers). The moderate cooling rate allows small visible crystals to form in the rock.

Dolerite has some large crystals among its smaller crystals, making it a kind of rock known as porphyry. The different crystal sizes are the result of different rates of cooling as the magma body moved upward. The large crystals, called phenocrysts, in dolerite are feldspar crystals that grew as the magma cooled slowly deep in a magma chamber. Later the magma with the large phenocrysts moved upward quickly, causing more rapid cooling of the rest of the magma and the formation of the small crystals that make up the rest of the rock.