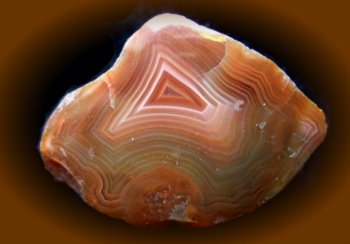 Agate is a mineral and gemstone composed of layers of microcrystalline quartz, generally of different varieties of colors, intimately joined together. Agate usually occurs as rounded nodules or veins in other rock. The layers of colored quartz are often concentric, and sometimes appear in cross section nearly concentric.

The composition of agate varies greatly, but silica is always predominant, usually with alumina (aluminium oxide) and iron oxide. Chalcedony, carnelian, amethyst, common quartz, jasper, opal, and flint occur as layers in agate, and are spoken of as kinds of agate. There are also clouded agates, star agates, moss agates, etc., so called from their appearance. Agate can be finely polished and is much used for ornamental purposes. Hardness: about 6.5, specific gravity: about 2.6.

Agate was believed in various cultures to have certain beneficial properties. Jews used agate to avoid falling and Arabs to improve the blood. In medieval times it was an anti-snake medicine. North Americans Indians used it to make implements of various kinds. It is still a symbol of good health and long life.