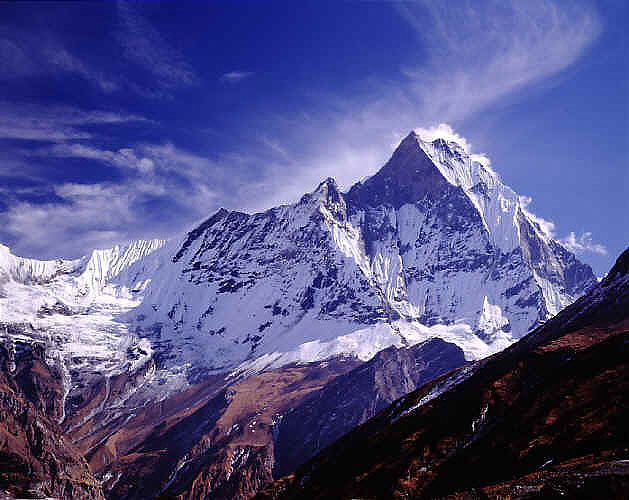 Fig 2. Processes involved in the formation of mountains. 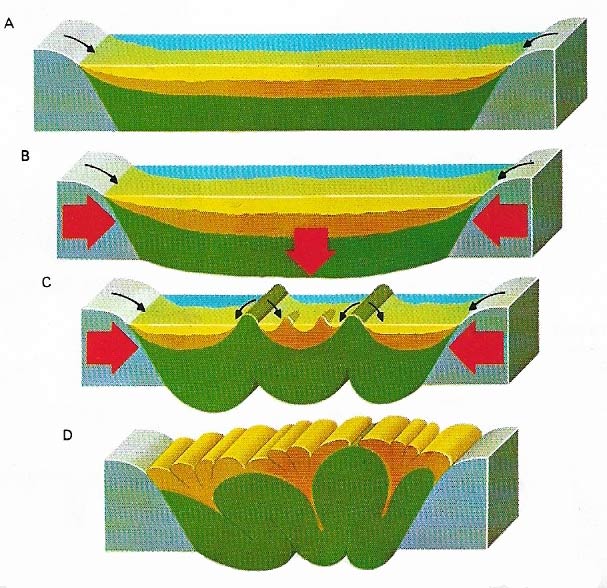 Fig 3. Geosynclines are the birthplaces of mountains. They are large troughs where thick layers of sediment can accumulate (A). Where geosynclines develop between two colliding crustal plates (B) the sediments can be squeezed up as broad ridges called geanticlines ((C). Further compression creates mountain ranges (D). The whole process is usually accompanied by pressure-induced recrystallization or melting, which then forms metamorphic, plutonic, and volcanic rocks; examples of each of these are, respectively, gneisses, granites, and rhyolites.

Fig 4. The Canadian Rockies, in their western part, consist of intensely metamorphosed strata (1). High pressure here melted granites. These granites, expanding with heat, became lighter than the overlying rocks and rose up through them as intrusions (2). The uplift sheared the Paleozoic strata (3) to the east along low-angle faults (4) which also separate these strata from the underlying crystalline basement (5). The piling-up of these slabs by thrust-faulting finally led to a considerable thickness of sedimentary rocks.

Fig 4. The highly-folded strata of the western Alps have not only been crumpled and folded but also pushed great distances northward as nappes. Where pressure and heat were sufficient the sedimentary strata were also transformed into metamorphic rocks such as gneiss and schist (5, 6, 7, 8). The areas shown here are (1) basement; (2) flysch zone; (3) Pre-Alps; (4) Helvetic nappes; (6) Dent-Blanch nappe; (7) Mont Rosa nappe; (8) Ivrée zone; (9) Dinaric Alps.

A mountain is a landmass elevated substantially above its surroundings. The difference between a mountain and a hill is essentially one of size: the exact borderline is not clearly defined. Plateaus, or table-mountains, unlike most other mountains, have a large summit area as compared with that at their base. Mountains may stand up above the general level of a plateau, or a plateau may be carved by deep river valleys or canyons to formed a dissected plateau. An intermontan plateau is completely surrounded by mountains. A massif is a plateau-like upland area, with abrupt margins and often complex geologic structure.

Most mountains occur in groups, ranges, or chains. The processes involved in mountain-building are termed orogenesis. Orogenies can be largely explained in terms of the theory of plate tectonics. Thus the Andes have formed where the Nazca oceanic plate is being subducted beneath (forced under) the South American continental plate, and the Himalayas have arisen at the meeting of two continental plates (Fig 1).

Mountains are of four main typest: fold, block, dome, and volcanic (Fig 2). Fold mountains can vary widely in complexity but still conform to the same basic type. The Alps, Carpathians, and Himalayas form the world'slargest fold mountain chain. The rocks have been compressed and crumpled in extremely complex ways, with intrusions of molten rock, widespread metamorphism, and faulting. The numerous earthquakes in Turkey and Iran indicate that mountains there are still moving.

Block mountains are large-scale faulted structures. Internally a block mountain is usually highly folded and faulted and may have been created either by a deep fault or by an exceptionally large horst (block or raised strata) which was then shaped by erosion. Many block mountains – for example, in the Basin and Range province of Nevada – rise abruptly above the surrounding lowland.

Domes are formed by the lifting of strata, as when granitic magma is intruded. As the lifting increases the surface is worn away by erosion and underlying granite is exposed. When such domes are large and high they constitute true dome mountains, such as the Black Hills of South Dakota.

Volcanic mountains differ from others in that they grow visibly during eruptions. When their last growth was recent, their shape is relatively unaffected by erosion. As more eruptions take place on the same site, so the successive outflows of ash and lava increase the height of the volcano. Volcanic mountains in continental interiors are comparatively rare. They are mostly submarine or island features and can form island arcs several thousand kilometers long; one such arc is the Aleutian Island chain.

Fold mountains are by far the most important because they form very large ranges thousands of kilometers long. Fold mountains are often associated with block-faulted mountains and with volcanic mountins because the forces causing the folding of the rocks are the same that produce faulting and promote vulcanism. The mechanism of the large horizontal compressions leading to the crumpling and folding of the sedimentary cover of Earth's crust was poorly understood before the plate tectonic theory.

According to plate tetonics theory, fold mountains are formed by the movements and collisions of large plates that make up Earth's crust. These plates are usually enormous and may underlie and carry whole continents. When two plates collide the more resistant one slides beneath the other, squeezing upward the sediment deposited in the geosyncline, or trough, between them. The great folds formed in the compressed sediment eventually break out above the surrouding region as mountains (Fig 3).

If the initial clash involves a fast-moving continental plate, the folds may be thrown even higher forming much larger mountain ranges. A continental plate thrust under another tends to maintain an upward pressure, rather like a submerged cork seeking to regain the surface: in time the stationary plate is levered upward and the attached fold mountains move with the plate. The HImalayas were formed when the northern edge of the Indian continental plate collided with and slid under the Asian plate; the Asian plate was then lifted and the world's highest mountain range was created.


Decline and destruction of mountains

Mountains are sculpted and destroyed by the climatic forces of frost, water (in the form of snow, ice, and rain) and wind. Frost may shatter and break up rocks to form screes (masses of debris at a cliff base) and snow and glaciers gouge out rock debris and transport it down the mountainside, leaving the debris as an elongated moraine at the tip of the glacier. Lower down, rivers cut into the mountainside and form zigzag valleys with interlocking spurs. These spurs may in turn be sliced off by glaciers making their way to lower levels down the mountain.

In time, weathering and erosion destroy mountains by lowering them so much that they are eventually transformed into broad plains cut by slowly meandering rivers. In arid climates wind erosion may finish the work by sand-blasting the remaining hills into a bare desert, leaving a surface known as a peneplain – that is, almost a plain.This stage is rarely reached; more commonly renewed earth movements uplift the area again, so beginning a new geological phase.


The study of mountains

Mountains help geologists to understand plate structures and to learn more about how rocks behave when they are compressed by moving continents. Mountains also mark the positions of ancient plate boundaries in, for example, Mesozoic-Cenozoic times when great ranges such as the Himalayas were being formed. Similarly, the study of ancient mountain ranges also reveals the sites of ancient oceans, enabling scientists to reconstruct the past geography of the planet.