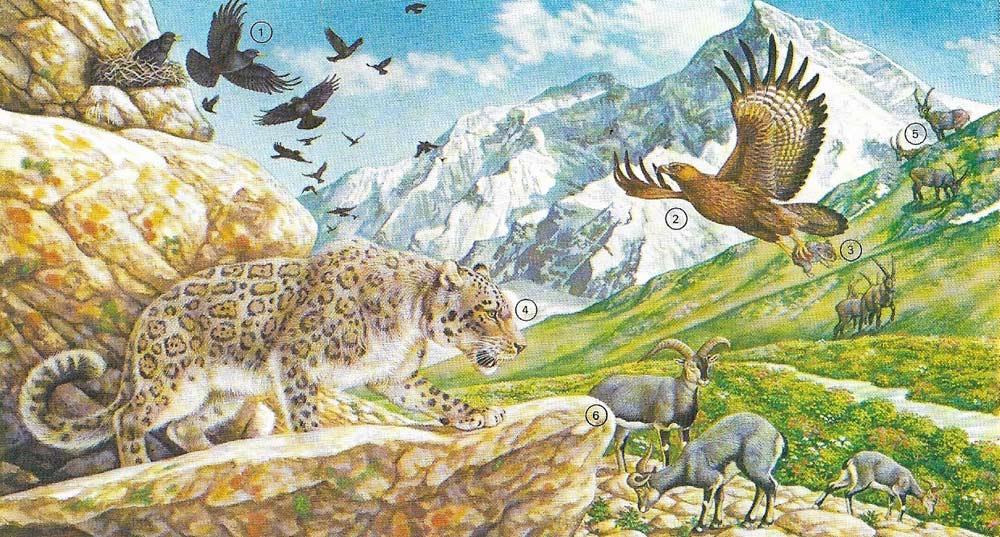 Fig 1.The Himalayan alpine zone extends near to the summit of Mt Everest 8,848 m (29,030 ft) high. Animals are limited in numbers and range by availability of food. At 5,000 m (16,500 ft), Alpine choughs (Pyrrhocorax graculus) (1) eat insects and worms. The golden eagle (Aquila chrysaetos) (2) flies far in search of carrion or small animals. The Tibetan pika (Ochotona ladacensis) (3), feeds on small green plants, storing some for winter. Stalking, rather than waiting in ambush, the snow leopard (Uncia uncial) (4) preys on both the Himalayan ibex (Capra ibex sakeen) (5) and bharal sheep (Pseudois nayaur) (6), which roam the slopes in search of small plants. 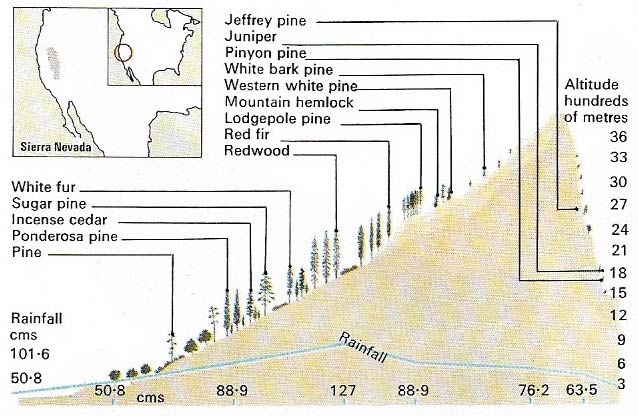 Fig 2. The Sierra Nevada of California is a classical example of the botanical zonation typical of most mountains. Shown here I cross-section it illustrates the influence of rainfall, altitude, slope, and aspect in determining the distribution of mountain vegetation. Although the climate is temperate, deciduous trees are replaced by semi-desert scrub because of low rainfall. The western slope has a higher rainfall and thus a richer and more varied selection of plants than the dry easterly slopes of the mountain.

Fig 3. Several species of large, hoofed animals (ungulates) live in herds with wide-ranging territories on the steep slopes and high grazing areas of the Himalayas and the Hindu Kush. Herds of chiru antelope roam over large areas of scant vegetation. Yaks, protected by dense, matted coats, also survive I high bleak areas where they often feed only on mosses and lichens. The Tibetan wild ass has the greatest vertical range of the animals shown here. It can withstand long periods without food and water. The Tibetan gazelle and the bharal, nayan, and shapu sheep are all less well equipped to endure the cold and so live in lower regions, feeding on the grassland plains. 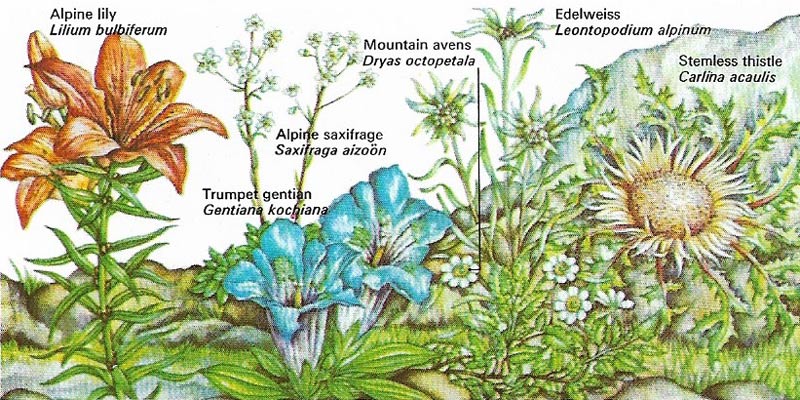 Fig 4. Mountain plants are most often short, supple, and compact with leaves and petals that show a variety of adaptations to cold and windy conditions. The alpine lily is a perennial plant and is among the tallest of all alpine species. But it has an extremely supple stem and thus can bend in the wind. The well-known edelweiss shows another adaptation to mountain life. The whole plant is covered with a thick layer of white hairs which act as a heat trap. The trumpet gentian has large, thin, and flat leaves to absorb a maximum amount of radiant energy. The mountain avens and alpine saxifrage are both very small, low-lying perennial plants, and are particularly common in northern Europe. The stem-less thistle is found in rocky places of mountain regions in western Europe. 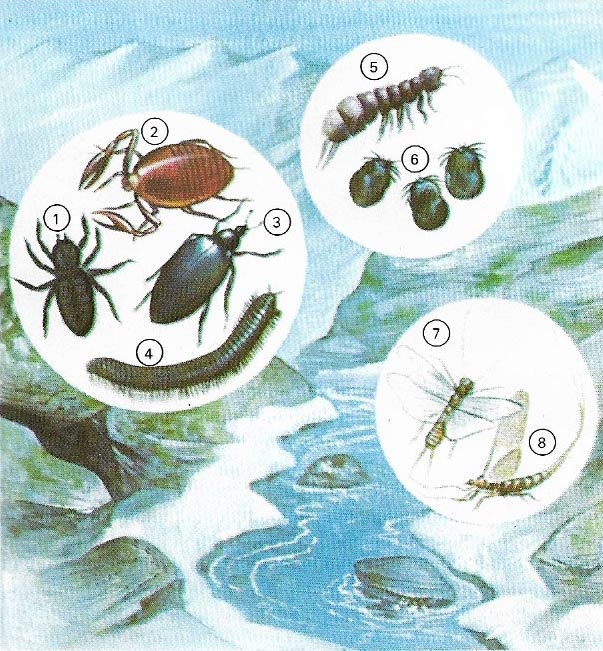 Fig 5.The insects and other arthropods of the high Himalayas are usually confined to three locations. Hollows under rocks shelter attid spiders (1), pseudoscorpions (2), acarbid beetles (3), and millipedes (Diplopoda) (4). Springtails (Collembola) (5) and mites (Acarina) (6) live on rock surfaces. Beside meltwater streams stoneflies (Plecoptera) (7) and mayflies (Ephemeroptera) (8) are found. Many live on seeds and pollen deposited on the mountain by wind. 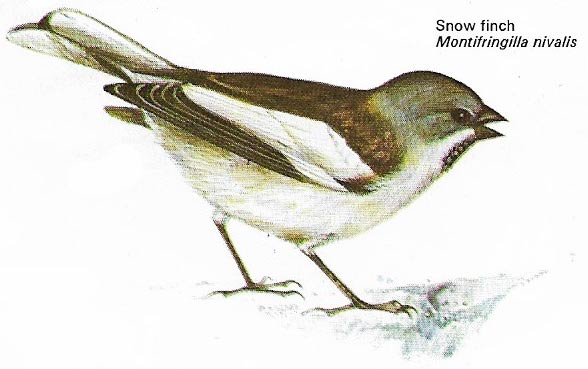 Fig 6.The snow finch (Montifringilla nivalis), is commonly found in mountainous parts of Eurasia. It lives at heights of up to 4,500 m (15,000 ft) and feeds on insects and the seeds of various alpine plants. 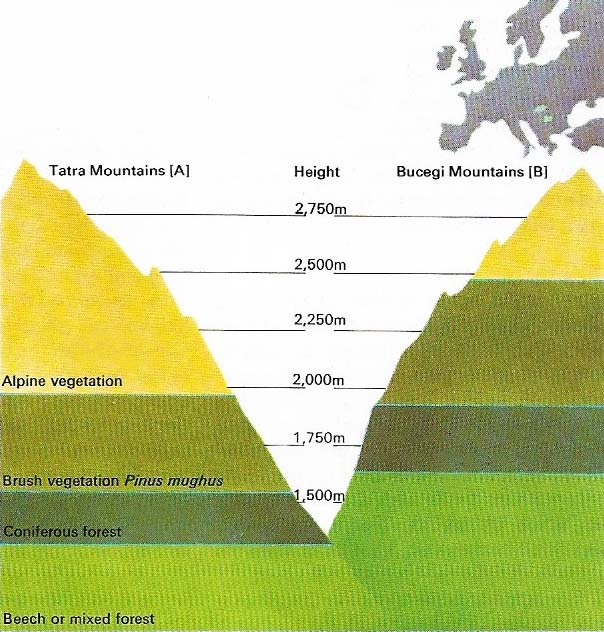 Fig 7. Mountains close to each other, such as the Tatra and more southerly Bucegi mountains of central Europe, have similar vegetation, but the altitudes at which individual zones occur may vary. This variation is a reflection of differences in climatic conditions.

Mountains make up about five percent of the Earth's land mass. The world's great mountain ranges are not confined to any one latitude but are found in tropical and temperate regions and in all continents. Specifically, the world's major mountain ranges are the mountain ridge from Alaska to the southern tip of South America which includes the Rockies and Andes; the Appalachians of eastern North America; the various ranges of the Eurasian land mass, including the Alps, Pyrenees, Caucasus, and Atlas mountains; and the Himalaya range (1,3) between the Palearctic and Oriental regions. In Africa there are several isolated mountainous regions in Ethiopia, Kenya, and Rwanda. Australia has one major range – the Great Divide of the eastern coast.

The plants and animals of mountains comprise different species according to locality but all share adaptations essential to survival in this habitat and some of these adaptations are very similar to those of plants and animals found in polar regions. The range of life on a mountainside is very wide, for in terms of climate a difference in altitude of 70 m (200 ft) is equivalent to 1° of latitude – roughly 110 km (70 miles). This is due to sharp falls in temperature and rises in precipitation up the mountainside.

Mountain plants reflect changes of climate by showing a definite vertical zonation. This is modified by the distance from the equator. Mount Kilimanjaro (5,595 m (19,340 ft), in Africa, shows all the possible mountain zones – tropical forest, deciduous forest and coniferous forest which merges into the alpine zone at the tree line. Topping the alpine zone are snow and ice. Mountains in temperate regions such as the Sierra Nevada (Fig 2) have no tropical zone while those at even higher latitudes, as in the Northern Rockies, have no temperate zone. Herbivorous animals, from insects to mountain goats, show a similar zonation because their distribution is limited by food sources, but mountain carnivores tend to be more mobile.

As in all other habitats, the plants and animals of mountains are affected by such factors as soil, aspect, cover, and competition. And because of the harsh environment of the higher zones the number of species that are able to survive is inevitably limited.

Plants, as in all ecosystems, are the basis of the mountain food chains. Plants of the alpine zone (Fig 4) are either short, compact, and virtually stemless or have supple shoots and stems. These adaptations enable them to survive cold, strong winds. Many mountain plants have extensive root systems to provide anchorage against the wind and to increase their chances of obtaining water on dry slopes. The common alpine cushion plants stand only a few centimeters high yet their roots may penetrate almost a meter (39 in) down into the soil. Water conservation within alpine plants is enhanced by such adaptations as waxy coverings on the leaves and the alpine edelweiss (Leontopodium alpinum) has leaves covered with hairs whose function is to trap heat and reduce loss of water. To combat freezing, plants such as the mountain crowfoot (Ranunculus glacialis) have a rich cell fluid that acts as an antifreeze. The alpine soldanelle (Soldanella alpine) can even melt surrounding snow by releasing heat from the breakdown of carbohydrate within its cells.

In the alpine zone the summer growing season lasts only a few weeks. As a result most alpine plants are perennials. The cushion pink (Silene acaulis) may take ten years to flower, but when it does bloom several hundred flowers may appear. This low but concentrated reproductive rate probably occurs because it takes a very long time for the plant to build up sufficient food reserves to enable it to flower. Many mountain plants are self-pollinating, a mechanism that ensures fertilization in a situation where there are few flying insect pollinators. For the same reason wind-pollinated species out-number insect-pollinated ones.

Many mountain animals tend to stay on high slopes and peaks throughout the year but can avoid extreme conditions in a number of ways. Larger herbivorous animals of the alpine zone, such as sleep, goats, and antelopes – and their attendant carnivores – migrate to lower, snow-free slopes in winter, returning to the higher regions in spring. Marmots (Marmota spp), and to a lesser extent ground squirrels (Citellus spp), hibernate. The marmots gorge themselves with food in the summer and lie dormant in burrows during the winter, slowly using up their stored energy supplies. The European snow vole (Microtus nivalis) remains active in winter in its underground home, using hoarded food. Pikas (Ochotona spp) often remain above ground in winter, living on dried plant material they have previously hidden beneath rocks (8).

Birds (Fig 6) are well adapted to altitude. Their dense covering of feathers provides excellent insulation. Manu insects can tolerate cold conditions above the tree line because their body fluids have a low freezing point. The glacier flea (Isotoma saltans) can withstand being frozen solid for short periods, while springtails (Collembola) have even survived being trapped in ice for several years. Most insects of high altitudes, however, remain dormant over the winter in hollows beneath snow-covered rock (Fig 5).