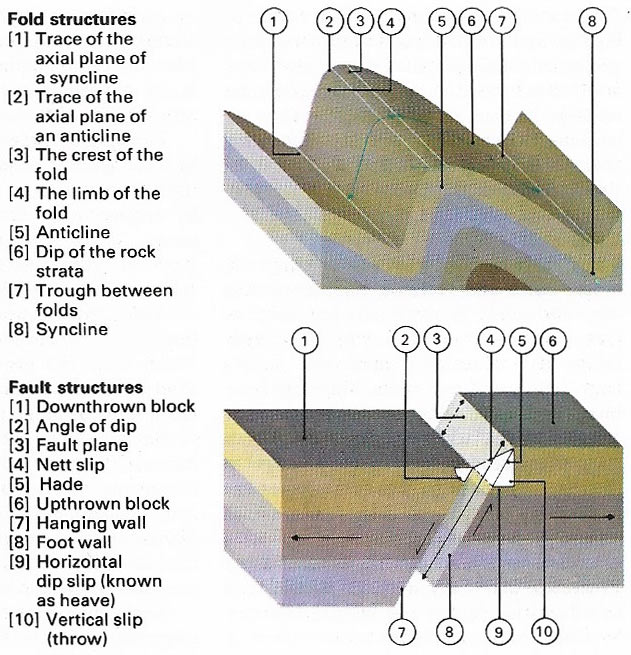 Fig 1. Comparison of folds and faults. 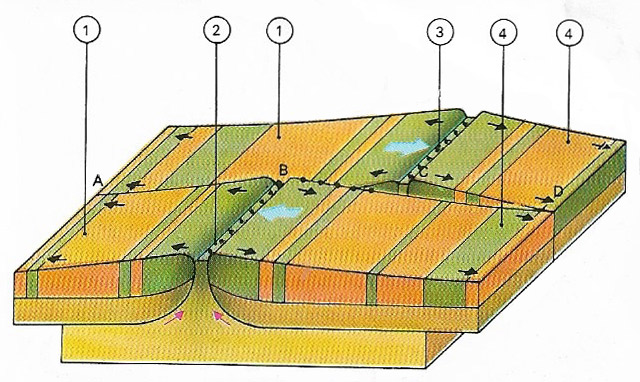 Fig 2. Transform faults separate two crustal plates (1, 4) where they move apart from one another. A transform fault links two segments of a ridge (2, 3) and the ridge offset gives an apparent motion (blue arrows) opposite to the real movement (black). The transform fault is active obly between the ridge crests (BC) where opposite crustal spreadings occur; it is only a dead scar along (AB) and (CD) where both sides move together. 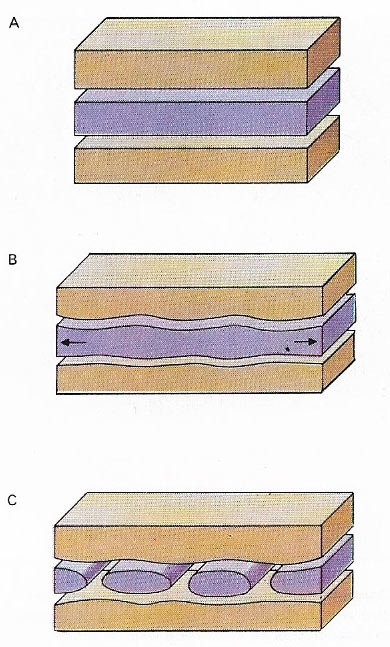 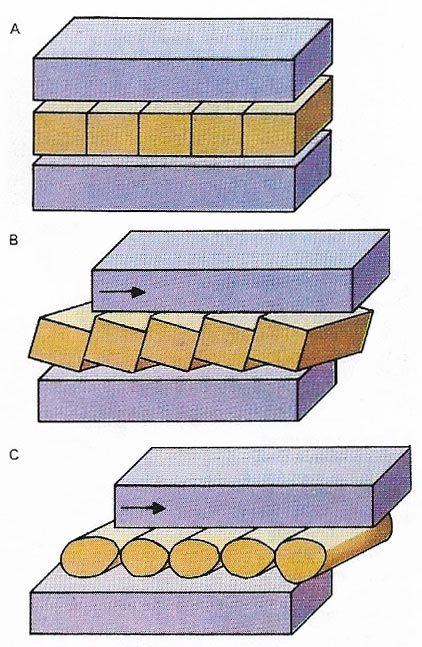 Fig 5. Shearing of a competent bed between two incompetent beds (A) may break up the incompetent bed (B), which is ground into rods called mullions. (C). Geologists use boudinage and mullion structures to tell them what kind of forces have been at work and in what directions they have been acting.

When rocks can no longer bend under pressure they crack and a fault is formed.

A fault is a fracture or zone of fractures in a planet's crust, accompanied by displacement of the opposing sides parallel to the fracture. There are three basic types of fault – strike-slip, normal, and thrust – as shown in the diagram. These range in size from a few tens of meters to hundreds of kilometers in dimension.

Strike-slip faults are vertical (or nearly vertical) fractures where the blocks have mostly moved horizontally. If the block opposite an observer looking across the fault moves to the right, the slip style is termed right lateral; if the block moves to the left, the motion is termed left lateral. A transform fault (Fig 2) is a special variety of strike-slip fault that accommodates relative horizontal slip between other tectonic elements, such as oceanic crustal plates. Transform faults often extend from mid-ocean ridges.

Dip-slip faults are inclined fractures where the blocks have mostly shifted vertically. If the rock mass above an inclined fault moves down, the fault is termed normal, whereas if the rock above the fault moves up, the fault is termed reverse. A thrust fault is a reverse fault with a dip of 45° or less. Oblique-slip faults have significant components of different slip styles. A blind thrust fault (Fig 3) is a thrust fault that does not rupture all the way up to the surface so there is no evidence of it on the ground. It is "buried" under the uppermost layers of rock in the crust.


Other aspects of faults

The fault plane is the planar (flat) surface along which there is slip during an earthquake. The fault trace is the intersection of a fault with the ground surface; also, the line commonly plotted on geologic maps to represent a fault.

A fault scarp is a cliff or steep slope formed directly by movement along a fault and representing the exposed surface of the fault before modification by erosion and weathering. Fault gouge is crushed and ground-up rock produced by friction between the two sides when a fault moves.

Slip is the relative displacement of formerly adjacent points on opposite sides of a fault, measured on the fault surface. The slip rate is how fast the two sides of a fault are slipping relative to one another, as determined from geodetic measurements, from offset man-made structures, or from offset geologic features whose age can be estimated. It is measured parallel to the predominant slip direction or estimated from the vertical or horizontal offset of geologic markers.

As they are produced by the same pressures, faults are frequently associated with folded areas. Sometimes the surface strata may crack into a complex mosaic of blocks by renewed movement along an existing buried fault. Reactivation of such a buried fault is believed to have been responsible for the disastrous 1966 Tashkent earthquake. Refaulting occurs in many areas where new and different stress fields are superposed upon ancient ones. Some regions have been refaulted and refolded several times, as in the complex Precambrian areas of Finland and Canada.