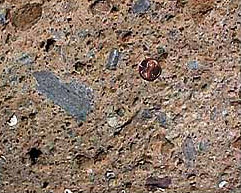 A typical tuff, one of several layers deposited during violent volcanic eruptions that shook the Mojave Desert about 18 million yr ago. Credit: USGS.

Tuff is a volcanic rock made up of a mixture of rock and mineral fragments in a volcanic ash matrix. Tuff can be found wherever there are explosive volcanic eruptions. The particles in tuff vary in size from fine to coarse but are generally smaller than 4 mm (0.16 in). They may be either straified or heterogeneous in arrangement.

Tuff forms when some combination of ash, rock and mineral fragments (pyroclastics or tephra) are blasted into the air, then fall to the ground as a mixed deposit. Most of the rock fragments tend to be volcanic rocks that were once solidified parts of the volcano that erupted to produce the tuff, but sometimes other types of rock are blasted out and incorporated into the tuff as well. Sometimes erupted material is so hot when it reaches the ground that it fuses together to produce a welded tuff.