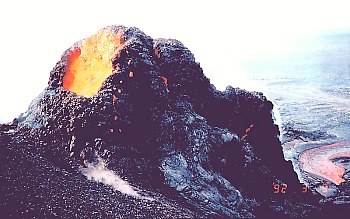 Spatter cone. A small short-lived lava fountain built this elongate cone of spatter around a vent located on the flank of the much larger Pu'u O'o spatter and cinder cone. This spatter cone is 4–5 m tall. Credit: T. N. Mattox / US Geological Survey. 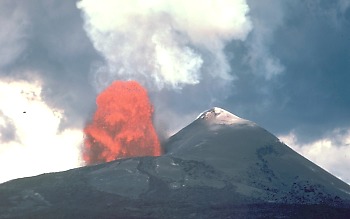 Spatter and cinder cone. Lava fountain from the main vent of Pu'u O'o adds new tephra to its towering spatter and cinder cone. In 1986, the cone was about 255 m tall. The summit was built higher than the main vent (about 86 m higher) as tephra from dozens of tall fountains between 1983 and 1986 was blown by the persistent trade winds toward the southeast. Credit: C. Heliker / US Geological Survey.

Long-lived basaltic lava fountains that erupt spatter, scoria, or cinder, and other tephra from a central vent typically build steep-sided cones called spatter-and-cinder cones. The greatest bulk of these cones consists of spatter, but during fountaining a lava flow usually pours down one side of the cone.

Eruptions that build spatter and cinder cones are much longer in duration and much more varied in intensity than those that eject only spatter to build spatter cones and ramparts.