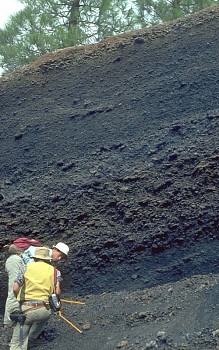 Scoria exposed in the cross section of a cinder or scoria cone. Credit: J. Lowenstern / US Geological Survey.

Scoria is a vesicular (bubbly) glassy lava rock of basaltic to andesitic composition ejected from a vent during explosive eruption. The bubbly nature of scoria is due to the escape of volcanic gases during eruption. Scoria is typically dark gray to black in color, mostly due to its high iron content. The surface of some scoria may have a blue iridescent color; oxidation may lead to a deep reddish-brown color.

Originally, scoria was the name for the silicate slag left over from the smelting of ore. The word scoria, in fact, stems from the Greek word for refuse or trash. Scoria resembles silicate slag; thus its name.

Because scoria is very hard and porous, it makes a wonderful base for roads (road metal). In volcanic areas, scoria is often quarried from cinder cones and laid out as the foundation for small country roads, or used during winter to provide friction for automobiles.

A highly expanded form of scoria is called reticulite, where bubble walls have burst, leaving a three dimensional network of delicate glass threads. Because reticulite is so expanded, some people call it basaltic pumice.