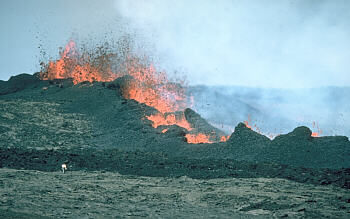 In less than 24 hours, these low lava fountains built a spatter rampart along the sides of the eruptive fissure on Mauna Loa Volcano, Hawai'i. Note person for scale in lower left. Credit: J. D. Griggs / US Geological Survey.

Lava fountains that erupt from an elongate fissure will build broad embankments of spatter, called spatter ramparts, along both sides of the fissure. The spatter commonly sticks together, or agglutinates, when it lands and is buried by later spatter. In contrast to these low linear fortifications, spatter cones are more circular and cone shaped – the only real distinction between the two structures is their shape.