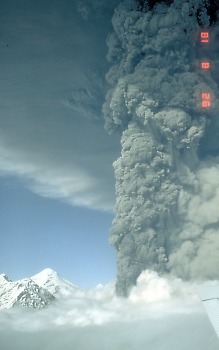 A plinian-type explosive eruption from the Crater Peak vent (hidden beneath clouds) on Mount Spurr, Alaska, sent an eruption column to a height of about 18 km above sea level. Credit: R. McGimsey / US Geological Survey.

A plinean eruption is a large explosive event that forms an enormous dark column of tephra and gas high into the stratosphere (altitudes greater than 11 km). Such eruptions are named for Pliny the Younger, who carefully described the disastrous eruption of Vesuvius in 79 AD. This eruption generated a huge column of tephra into the sky, pyroclastic flows and surges, and extensive ash fall. Many thousands of people evacuated areas around the volcano, but about 2,000 were killed, including Pliny the Elder.

Large plinian eruptions sometimes result in the withdrawal of so much magma from below a volcano that part of it collapses to form a large depression called a caldera.

Some plinian eruptions inject such large quantities aerosols (small liquid droplets) into the stratosphere that surface temperatures on Earth may decrease slightly. A few recent eruptions resulted in detectable cooling – the 1991 eruption of Mount Pinatubo, Philippines, and the 1982 eruption of El Chichón, Mexico. The massive 1815 eruption of Mount Tambora volcano, Indonesia, is thought to have caused the 1816 "Year without a Summer" in the northeastern US, Canada, and western Europe.