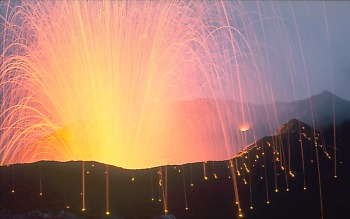 A Strombolian eruption is a volcanic eruption characterized by the intermittent explosion or fountaining of basaltic lava from a single vent or crater. Each episode is caused by the release of volcanic gases, and they typically occur every few minutes or so, sometimes rhythmically and sometimes irregularly. The lava fragments generally consist of partially molten volcanic bombs that become rounded as they fly through the air.

The word strombolian is derived from the volcano Stromboli, one of the Aeolian Islands north of Sicily. Stromboli has been almost continuously in eruption for at least the past 2,400 years. Other volcanoes that often exhibit strombolian activity include Etna (Italy), Pacaya (Guatemala), and Erebus (Antarctica).