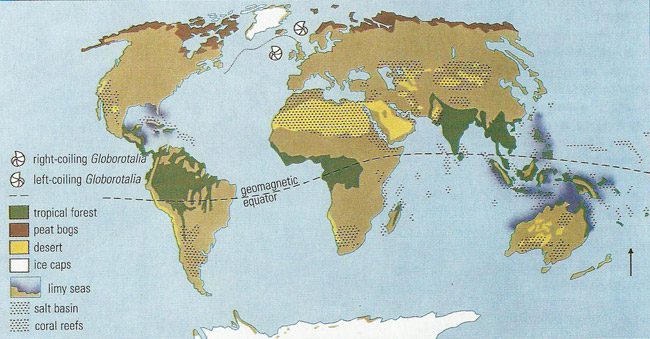 The present-day formations of preservable climate-related features are shown. The foraminiferan Globorotalia is an indicator of sea temperature. It coils right in warm waters and left in cold waters. Corals reefs and major carbonate deposits are both typical of warm, shallow seas. Common to desert environments are evaporate deposits (salt basins) and reddish-hued sandstones. The lush plant life of tropical forests and swamps is the raw material from which coal is formed. Ice sheets groove and scratch the face of rocks and leave characteristic deposits of glacial till, and peat bogs are typical of the tundra environment along the fringes of the ice caps.

Paleoclimatology is the study of prehistoric climates. Records of past climates are found in sedimentary rocks, in cores taken through deep layers of ice, and in fossil-bearing cores from the beds of seas and lakes. From such evidence, climatologists have discovered that the Earth is subject to alternate periods of cold, called glacials or ice ages, and warmth, called interglacials. During the last two million years there have been 17 ice ages.