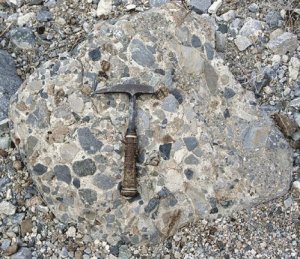 Conglomerate, also known as pudding stone, is a rock consisting of various-sized, round, water-worn stones cemented in a sedimentary matrix. If the fragments are angular it is known as breccia. Occasionally, the stones are held together by simple compression without any cement. Conglomerate is gravel compacted into a more or less coherent mass. Like coarse gravel and shingle, some conglomerates show no lines or planes of deposition. Generally, however, rocks of this kind exhibit roughly alternating layers of finer and coarser materials. The included stones may consist of any kind of rock or mineral, but harder types, such as quartz-rock and quartz preponderate. Conglomerates are generally beach-deposits, either marine or lacustrine; sometimes they are of fluvial origin. See also agglomerate.