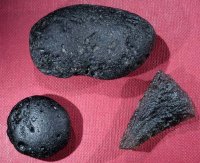 A tektite is a small, dark, glassy sphere or aerodynamically shaped button, usually less than 10 cm in diameter, formed from molten rock ejected probably as a result of an asteroid or comet impact with silicon-rich rocks on the surface.

Tektites are found scattered on Earth's surface in several major locations, known as strewn fields. The largest of these covers the whole of south Australia and Tasmania and has yielded australites dated at 600,000 to 750,000 years. A similar age has been measured for the billitonites found on Billiton Island, Indonesia. The moldavites, dating back 14.7 million years, occur in the Moldau River valley in the Czech Republic and are thought to have been produced in the impact that created the 24-km-diameter Ries Crater, about 500 km away neat Nordlingen, Germany.

Translucent and dark green, moldavites have been used for jewelry, religious articles, and decorative objects since prehistoric times. The oldest known tektites, with ages of 33 to 35 million years, are the bediasites, found in Texas and named after the local Bedias tribe, and georgiaites, named after the state where they occur.