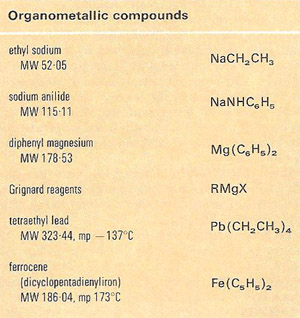 There are three main types: (1) the alkyl derivatives of Group IA and IIA metals of the periodic table (including Grignard reagents), which have ionic bonds, and are powerful bases and reducing agents; (2) derivatives of other main group metals, which are volatile, covalently-bonded compounds; and (3) transition metal derivatives (including sandwich compounds) with special d-orbital bonding.

Organometallic compounds are prepared by reacting a metal with an alkyl halide or a reactive hydrocarbon, or by substitution.

Ernst Fischer was a German chemist who became professor of chemistry at Munich in 1957. He was awarded with Geoffrey Wilkinson the 1973 Nobel Prize in Chemistry for their work on organometallic compounds.