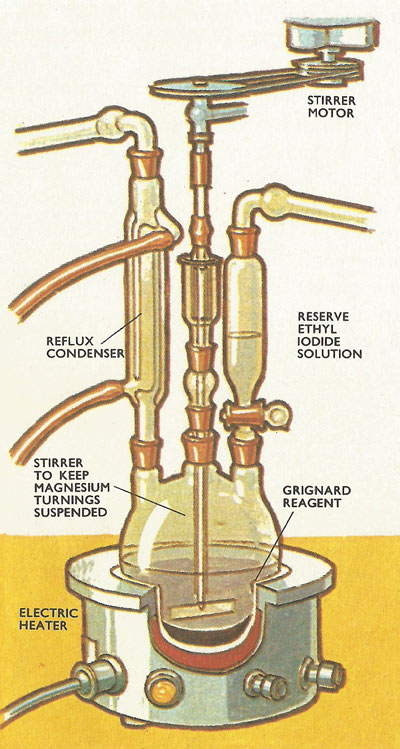 Fig 2. In the three-necked flask (above) a Grignard reagent is being prepared by the action of magnesium filings on a solution of ethyl iodide in dry ether (below). 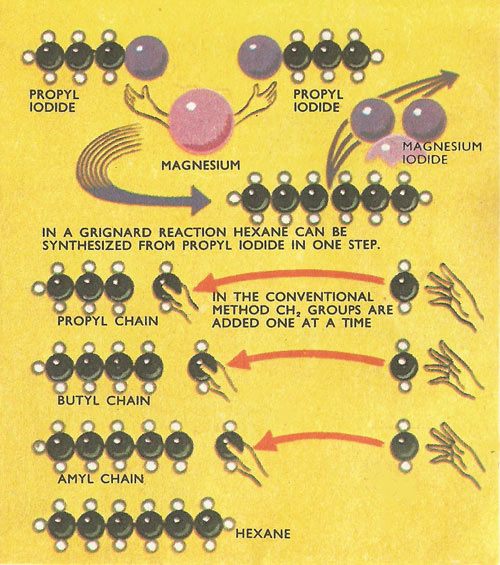 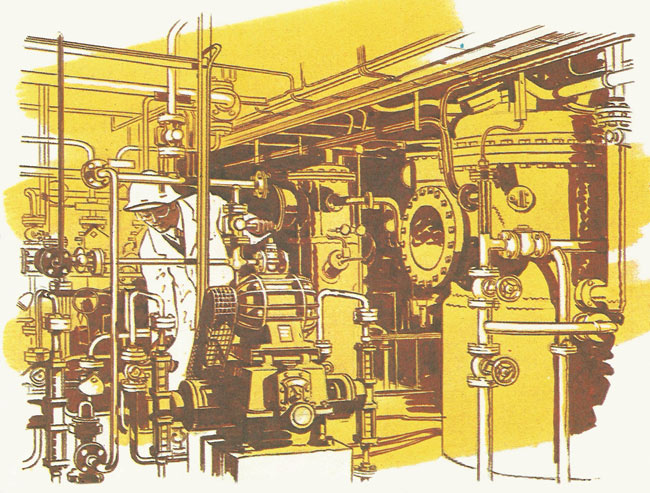 Fig 6. The Grignard reaction is important commercially in the production of chlorosilanes – intermediates used in the manufacture of silicones. This picture shows vessels in which chlorosilanes are made by this process.

Grignard reagents are any of a family of organometalic compounds of great importance in laboratory and industrial chemical synthesis. They are made by reacting alkyl halides or aryl halides with magnesium in an ether solution, and are commonly represented as RMgX, where R is an alkyl group or aryl group. They are powerful nucleophiles, and react with many compounds, introducing the group R. Examples are methylmagnesium iodide (CH3MgI) and phenylmagnesium bromide (C6H5MgBr). The Grignard reagents are named after the French chemist François Grignard who discovered them in 1900.

In the twentieth century the two branches of chemistry were brought closer together with developments like the preparation of whole series of organometallic compounds. In these compounds, an atom of a metal linked directly to a carbon atom in the organic molecule. One particularly interesting and useful group of organometallic compounds is that which magnesium forms with alkyl halides. They form a convenient means of building up several different types of organic compounds known as the Grignard reagents.

It is unusual to build up a complicated molecule from simpler ones in a single step. Several stages are usually needed and Grignard reagents provide useful stepping stones. They have one great advantage over many other intermediate substances used in preparing new compounds. It is not necessary to isolate a Grignard reagent from the reaction mixture before it goes to the next stage.

Grignard reagents are formed by the combination of magnesium with an organic chlorine, bromine or iodine compound (e.g. ethyl iodine, C2H5I). As Grignard reagents are easily decomposed by water, they are prepared in dry (water free) ether. It is essential that all the other reagents and the reaction vessel too are perfectly dry.

After the organic halogen compound (alkyl halide) has been dissolved in dry ether, small turnings of magnesium are added to this solution which is then heated carefully for some time. The reaction vessel is fitted with a condenser so that vapor which boils off condenses in the cooler part of the tube and drips back in the flask. This process is called refluxing (Fig 2).

The magnesium atom in Grignard reagent links the hydrocarbon chain with the halide group (Fig 3). In subsequent reactions this magnesium halide group is replaced by a hydrocarbon chain or by another group of atoms. There are two different types of reaction in which new compounds are formed from the Grignard reagent. It may take part in a double decomposition reaction with another compound. The magnesium halide group changes place immediately with another group to form the new compound. Alternatively an extra group may be added onto the Grignard reagent in a addition compound is broken down by the action of dilute acid.

Grignard reagents are very useful for preparing pure samples of the more complicated molecules particularly those which are difficult to prepare by other means. Certain of the reactions with other reagents yield products which contain one more carbon atom in the molecule than was in the original alkyl halide. Grignard reagents can, therefore, be used for ascending the homologous series, i.e. for making whole families of chain compounds. The alternative and more tedious method is to introduce a cyanide group into the molecule.

Paraffins and primary amines can be formed directly from Grignard reagents in double decomposition reactions (Fig 4). If water is added to a Grignard reagent, the hydrogen ion from the water replaces the magnesium halide of the Grignard reagent, to form a hydrocarbon containing the same number of carbon atoms as the original alkyl halide.

Primary, secondary and tertiary alcohols, aldehydes, ketones and fatty acids, all these can be formed from Grignard reagents by addition reactions followed by hydrolysis. Alcohols are formed by the addition of a compound containing a carbonyl (C=O) group. If formaldehyde (H2C=0) is used, a primary alcohol is obtained. Aldehydes (except formaldehyde) yield secondary alcohols while ketones give tertiary alcohols (Fig 6).

The Grignard reagents provide useful short cuts for making various compounds which would otherwise have to be built up in several stages. They are particularly valuable in synthesizing the secondary and tertiary alcohols, and also some ketones which are not directly available from natural sources.

The Grignard reaction is important commercially in the production of chlorosilanes – intermediates used in the manufacture of silicones. Fig 1 shows vessels in which chlorosilanes are made by this process.