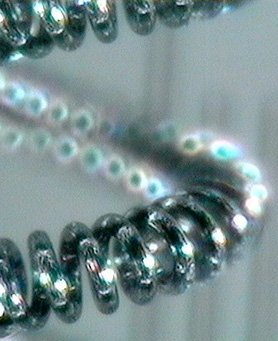 Fig 1. Tungsten was first separated from wolframite in 1782 by the brothers Fausto and Don Juan d'Elhuyar. A fine wire made from tungsten becomes white hot when carrying an electric current, as in an electric lamp. 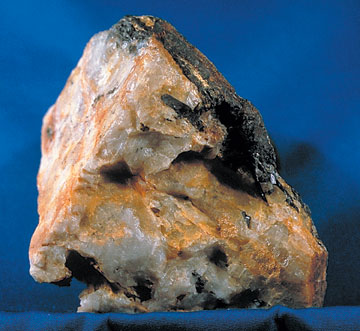 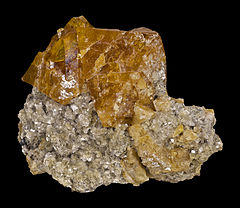 Tungsten (W) is a hard, brittle, corrosion-resistant, silvery-gray metallic element that has the highest melting point of any metal and the second highest of any element (after carbon); it also has the lowest vapor pressure of any metal. It is a transition element in group VIB of the periodic table. Tungsten is relatively inert, and in its chemistry resembles molybdenum.

Tungsten was discovered in 1758 by Axel Fredrik Cronstadt; in 1781 Carl Wilhelm Scheele isolated a tungsten oxide, and in 1782 the Spanish chemists (and brothers) Fausto and Juan Jose de Elhuyar, working in Vergara, first separated tungsten from the mineral wolframite. The name comes from the Swedish tung sten, meaning "heavy stone".

Tungsten is extracted from wolframite (named after the German wolfram for the element), scheelite (calcium tungstate, CaWO4), and other minerals.

Wolframite is iron manganese tungstate (Fe, Mn)WO4, the chief ore of tungsten (Fig 2). Wolframite forms brown to black monoclinic crystals or granular masses. It is found in quartz veins and pegmatites associated with granitic rocks and also in high-temperature hydrothermal veins in association with other minerals, including tin ores. China is the main producer. Hardness 5–5.5, relative density 7–7.5.

Scheelite is a mineral, calcium tungstatemolybddate, Ca(WO4MoO4), that is an important ore of tungsten (Fig 3). It is found in metamorphic deposits and in pegmatites. Scheelite crystallizes in the tetragonal system with bipyramidal crystals, and also occurs as massive granular aggregates. It reveals various tints with adamantine luster. Hardness 4.5–5; relative density 6.

Tungsten and its alloys are used in high-temperature structural materials, electrical elements, especially light filaments (Fig 1), and instruments requiring thermally compatible glass-to-metal seals. A filament is a length of tungsten resistance wire which glows white-hot on carrying a suitable electric current, used in incandescent filament lamps filled with inert gas or a vacuum. Lamp filaments, from 0.015 to 0.045 mm in thickness, are coiled once or twice (coiled coil) before being fused into the neck of the lamp. Heater filaments in electron tube cathodes operate at only red heat.

When added to steel, tungsten increases its strength. It is alloyed other metals to make "superalloys" which have special physical properties of high strength and heat resistance. Some of the applications for such superalloys are in turbine engines for jet aircraft and energy generation. Other alloys bearing tungsten are used for armaments, heat sinks, radiation shielding, weights and counterweights, wear-resistant parts and coatings.