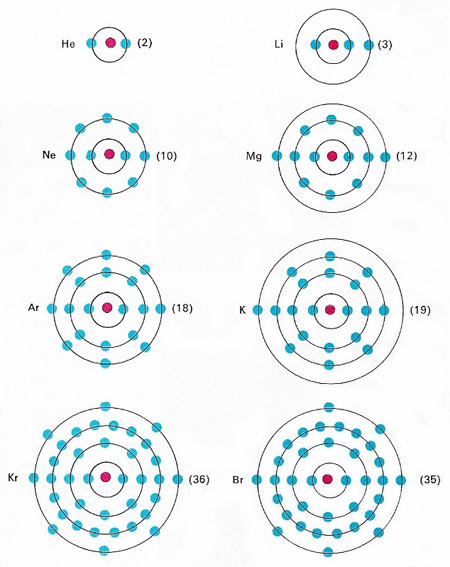 The periodicity of the elements is now known to be due to their electronic structures. The electrons in any atom can be envisaged as occupying "shells", each of which can hold only a certain number of electrons. For the first three shells, the numbers are 2, 8 and 18. If the outermost shell is either completely filled, or holds 8 electrons, the element is chemically unreactive: the gases helium (He), neon (Ne), argon (Ar) and krypton (Kr) all fulfil this condition. Lithium (Li) and potassium (K) are similar because they both have one outer electron, and both differ chemically from magnesium (Mg) and bromine (Br).

In atomic physics, a shell is a set of electrons with the same principal quantum number. The number of electrons permitted in a shell is equal to 2n2. A shell contains n2 orbitals, and n subshells.