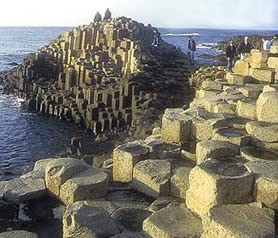 The Giant's Causeway is a natural structure that occurs on the coast in County Antrim, Ireland; it is one of the few places in the world where volcanic basalt has cooled in a columnar formation.

The columns approximately form a hexagonal tessellation (see tiling) and tend to break off to produce a pavement with this pattern. The full length of the columns can't be seen, but it is estimated that they may be 20 ft (about 6 m) high before merging into the underlying irregular basaltic mass. About 99% of the columns are believed to be hexagonal and only one triangular column is known. Though many of the hexagons are fairly regular, some have a side twice as long as their smallest side. Side lengths vary from eight to 18 in (20 to 46 cm) and the pillars break up into sections six to 36 in (15 to 90 cm) long, with a concavo-convex junction rather than a plane junction.

Other examples of such formations occur at Kirkjubaejarklaustri, in Iceland, and the Devil's Postpile, in California.