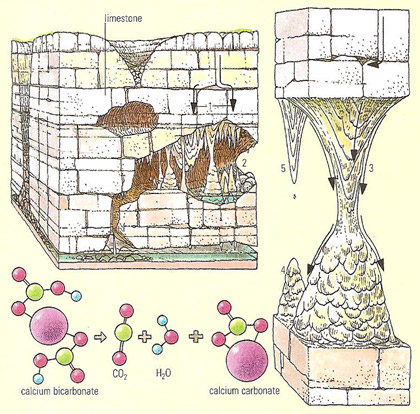 Weak carbonic acid, formed when rain absorbs carbon dioxide from the atmosphere, dissolved tiny amounts of calcium carbonate from limestone rock, as it percolates down through the rock (1). If the water enters a previously eroded cave (2), it forms drips (3). Some of the dissolved carbon dioxide escapes from the water, and the calcium bicarbonate in the water is precipitated as a calcite known as travertine, consisting of calcium carbonate. They form rising stalagmites (4) and descending stalactites (5) from which water drips. 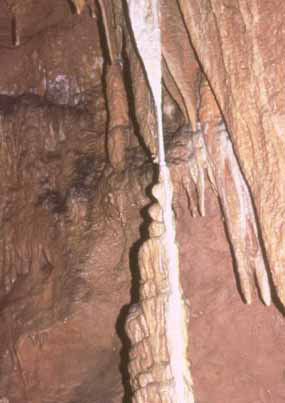 A stalactite and stalagmite just beginning to meet and form a column. Credit: US National Park Service.

Stalactites and stalagmites are rocky structures found growing downward from the roof (stalactites) and upward from the floor (stalagmites) of caves formed in limestone. (Remember, stalaCtites hang from the Ceiling and stalaGmites grow up from the Ground.)

Rainwater percolates through the rocks above the cave and, as it contains atmospheric carbon dioxide, can dissolve calcium carbonate en route. On reaching the cave, the water drips from the roof to the floor; as a drop hangs, some water evaporates, leaving a little calcium carbonate as calcite on the roof. Repetition forms a stalactite; and evaporation of the fallen water on the floor forms a stalagmite. The splashing of the water can give rise to stalagmites that resemble stacks of saucers.

On occasion, the rising stalagmite and descending stalactite fuse to form a continuous column. Stalactites, stalagmites, and columns are called dripstone because they are deposited by dripping water.

The growth of stalactites and stalagmites is usually extremely slow. Some take 4,000 years to increase by only 2.5 cm (1 in) in length. However, stalactites in Ingleborough Cave, Yorkshire, have been known to increase by 7.6 cm (3 in) in ten years.

Another deposit, caused by water seeping through a long crack in the roof of a cave, is a wavy band of calcium carbonate which grows across the ceiling like a fringed curtain. Water flowing down a wall or across a floor of a cave may build up a flowstone. Delicate thread- or finger-like formations called helictites sometimes jut out from a stalactite. Their origin is the subject of dispute. On the roofs of some caves are anthodites, which are branching, flower-like formations. In its pure state, calcium carbonate is transparent or white, but these and other cave features are often colored by impurities.