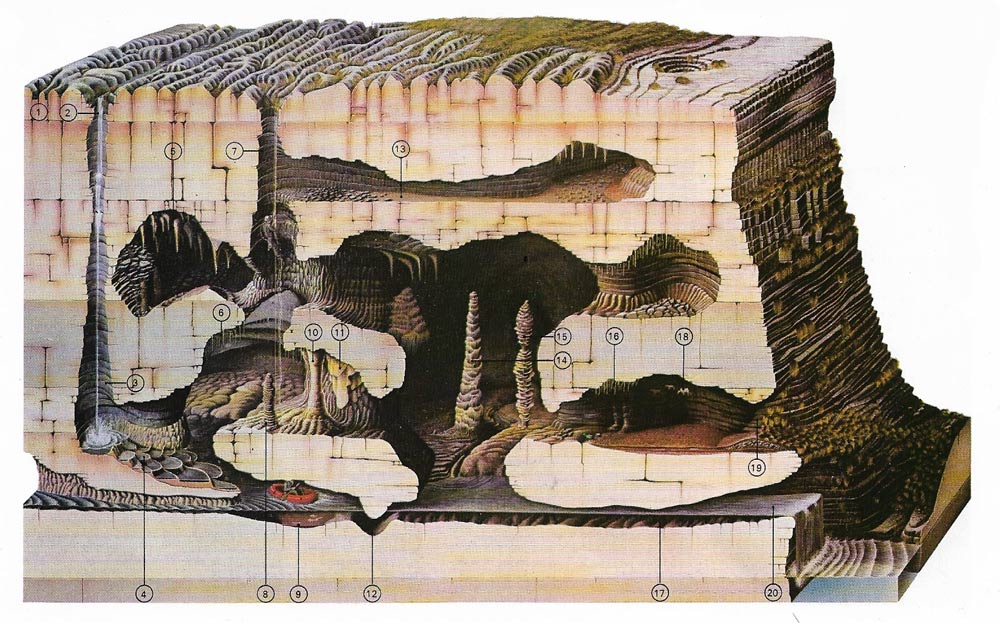 Limestone surfaces are often eroded into blocks called clints (1). Surface streams flow into dissolved sink-holes (2) that lead to a deep chimney (3). Potholes (7) are dry chimneys. Gours (4) are ridges formed as carbonate is precipitated from turbulent water. Streams flow at the lowest level of the galleries (17). Abandoned galleries (13) are common. A siphon (12) occurs where the roof is below water-level. Streams reappear at resurgences (20). Abandoned resurgences (19) may provide entrances to caves. Stalactites (5) include macaroni stalactites (6), curtain stalactites or drapes (11), and eccentric stalactites (16), formed by water being blown sideways. Stalagmites (14) sometimes have a fir-cone shape (15) caused by splashing, or resemble stacked plates (8). Stalactites and stalagmites may merge to form columns (10). Signs of ancient man (18) have been found in caves and blind white fish live in the pools (9). 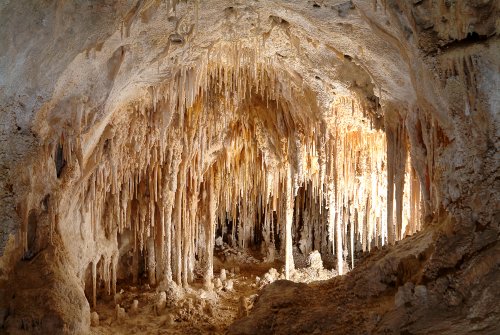 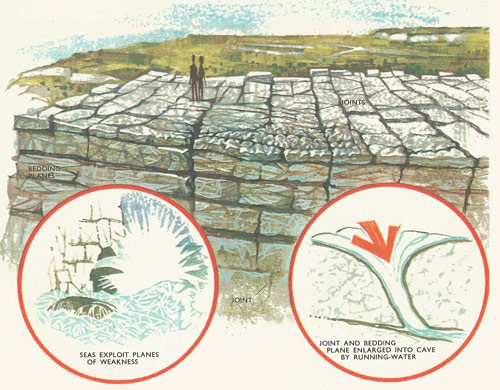 Limestone scarp showing bedding planes and joints. Such planes of weakness are explained by weathering and caves may form. Inset: the sea and running water are the two important cave-forming agencies.

Caves become enlarged by seepage and roof-fall into caverns (right). Complete roof collapse along a line of caverns may result in a dry limestone gorge. Left, the vertical-sided Cheddar Gorge, Mendip Hills, Somerset, may well have formed by a series of such collapses. 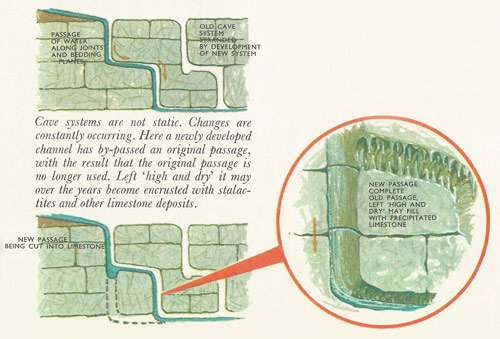 Development of a cave system. 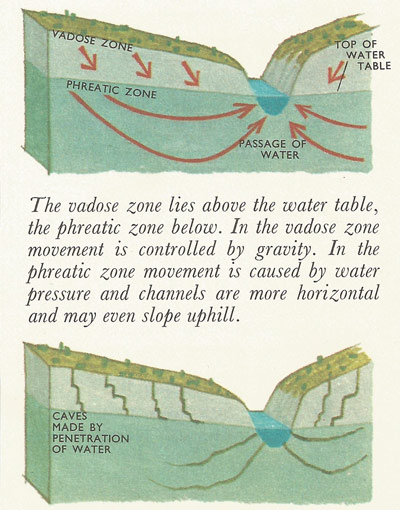 A cave is any chamber formed naturally in rock and, usually, open to the surface via a passage. Caves are found most often in limestone, where rainwater, rendered slightly acidic by dissolved carbon dioxide from the atmosphere, drains through joints in the stone, slowly dissolving it. Enlargement is caused by further passage of water and by bits of rock that fall from the roof and are dragged along by the water. Such caves form often in connected series; they may display stalactites and stalagmites and their collapse may form a gorge.

Caves are also formed by selective erosion by the sea of cliff bases. Very occasionally they occur in lava, either where lave has solidified over a mass of ice that has later melted, or where the surface of a mass of lava has solidified, molten lava beneath bursting through and flowing on (see lava tube).

The distinguishing feature of a pothole is that it is more or less vertical. Potholes may be up to 100 m (330 ft) deep. They generally occur in limestone rocks where water has enlarged a joint by solution. Potholes often provide the entrances to cave systems.

A swallow hole is a large pothole containing a flowing stream or river.

The scientific study of caves is called speleology from the Greek spelaion for 'cave'. Speleology embraces many scientific fields, including geology, chemistry, physics, and chemistry. The speleologist wants to know what the physical conditions are like underground, what organisms live there, and what creatures formerly used the caves as shelters. But perhaps most fundamental of all, they want to know just how caves have been formed.

Every sort of rock contains openings. This property is called porosity. The openings may be pore spaces between particles of sediment (primary porosity); or they may be fissures opened along planes of weakness (secondary porosity). The three planes of weakness important in cave formation are the bedding places – lines of contact separating rocks of different composition and physical properties; fault – fractures in the crust along that slabs of rock have moved; and joints – fractures that have simply opened in rocks under stress.

It is the planes of weakness rather than the pore spaces that are important in cave formation. The openings are initially very small. But they become enlarged by natural agencies – either the sea or running water.

The sea makes caves in all types of rock. Pounding waves beating against cliffs exploit the planes of weakness. The water rushing against the rocks traps air in the small openings already present. The air, enormously compressed, adds to the battering action of the waves and the rocks begin to disintegrate.

Any type of rock that outcrops at the coast is subjected to this treatment and caves can develop in all of them. However, the 'weak' rocks such as soft clays do not possess the necessary rigid strength and caves that begin to develop soon collapse. Larger, more enduring caves are cut into the harder rocks – sandstones, limestones, and igneous rocks – particularly where wave action is strong.

A rise in the level of the shore may mean that former shore-line caves are lifted high above their places of origin.

The action of moving water through the rocks is the chief factor in the making of inland caves. It is the corrosive action of the water – its ability to dissolve the rocks it is passing through – which is of greatest importance. The mechanical erosion by the moving water does not have the same marked effects. Consequently, caves are rarely found in igneous rocks or sandstones. They are nearly all confined to limestone country.

Limestones are composed of at least 50% calcium carbonate, sometimes with a certain quantity of magnesium carbonate also present. Pure water does not have much effect on limestone. But in falling through the air, and especially in penetrating through surface layers of soil, rainwater becomes charged with carbon dioxide – it becomes a weak solution of carbonic acid. The carbonic acid reacts with the insoluble calcium carbonate, forming the soluble bicarbonate salt, which is carried away.

Even so, not all limestones necessarily make good caving country. The limestone must be thick and receive a sufficient quantity or rain water. Next, the planes of weakness must be suitably arranged. Where joints and bedding planes are close together, too many openings are available and no single large passage develops. What is needed are well spaced planes with flow-off locally concentrated by favorable ground contours. By corrosion, funnel-shaped cave entrances may develop – the swallow holes or sink holes.

In Britain, the thick Carboniferous limestones are most suitable for cave formation. Chalk, a very pure limestone, is too weak and caves soon collapse.

Important in predicting just where caves are likely to develop in a limestone area is consideration of the water-table. Below the table, all cavities in the rock are permanently filled with water. This zone is called the phreatic zone. Above, rocks are not saturated – this is the vadose zone. Water simply passes through into the phreatic zone below.

The obvious place to expect caves to originate and develop is in the vadose zone. Water, charged with carbon dioxide, moves downward under the influence of gravity. Paths followed may be along dipping bedding planes, or they may be down almost vertical joints. In the north of England, vertical joints have commonly been followed by water. This gives rise to vertically descending caves, which are distinguished as potholes. In the south of England, for example the Mendip Hills, it is the inclined bedding planes that are largely followed, forming downward-sloping rather than vertical descents.

In the phreatic zone water movement also takes place, though not nearly so fast as in the vadose zone. Water is finally discharged by seepage into seas and rivers. The movement is caused not so much by gravity as by hydrostatic pressure – the water head. The pressure arises because the water table at the points of outlet are at a lower level than elsewhere in the table. Flow against gravity may even occur for water may at times be moving at a lower level than the ultimate point of discharge. Caves originating in the phreatic zone generally follow more horizontal paths than in the vadose zone and may even slope uphill.

Undoubtedly water flow in both zones has played a part in cave origin. By a lowering of the water table, however, either by a drier climate or by a nearby river cutting a deeper bed, the phreatic zone can become lifted into the vadose zone and the caves become modified by water moving directly under gravity.

A cave, by rock fall, may become very enlarged, in which instance it is called a cavern. Heavy falls of rock may, however, appreciably block an exit and the water becomes forced to flow out through another passage. The initial pattern may as a result become altered. Some roof collapses give rise to depressions in the ground above – the shake holes. Extremely large scale collapses may actually form gorges.

Pure water has little effect on limestone. Only between 20 and 74 parts per million of calcium carbonate by weight will be dissolved. In contrast, water containing carbon dioxide gas dissolves up to 400 parts per million. Some of the carbon dioxide comes from the atmosphere but far more is received when rain water seeps through the soil.

Thus, carbonated water may seep through the fissures and pores in the limestone, and quickly dissolve a quantity of lime. However, if the water should penetrate into a spacious cave in the vadose zone where carbon dioxide in the air is the same as in the atmosphere, then carbon dioxide is given off from the water and lime becomes deposited. Alternatively, because of drought, the water droplet may evaporate again with the precipitation of limestone. This is, of course, the exact reverse of the corroding process.

Such precipitation i the spacious airy caverns of the vadose zone gives rise to the stalactites and stalagmites, and frozen cascades. Many lesser known, more irregular, but equally beautiful structures may be formed as well.

Mammoth Caves in Kentucky comprise the world's largest underground cave network. The Mammoth Cave National Park consists of a limestone plateau, whose surface is pitted by more than 60,000 sink-or swallow-holes. Surface water drains into the sink-holes that link the caves to the surface. Some sink-holes are connected to the caves by vertical chimneys. The underground caves are interlinked by a maze of passages. The Great Mammoth Cave has more than 48 km (30 miles) of continuous passages. In the caves, water seeping through the limestone rock collects into rives, which finally emerge into the open at the base of the plateau, in the Echo River Valley.

Caves harbor a variety of animal life specially adapted to the dark environment, including blind, colorless, almost transparent shrimps, worms, mites, insects, and sightless newts, often called blind fish. These creatures live permanently in caves. Bats, also common in cave systems, have weak eyes and depend mainly on their sonar systems to guide them through dark tunnels. Every night hundreds of thousands of bats emerge from Carlsbad Caverns in New Mexico. Within 15 minutes' flight of the caverns is the Pecos Valley, where the bats feed on insects, returning to the caves shortly before dawn.

In prehistoric times the most important inhabitant of caves was man. Archeologists have found many traces of man's occupation – tools, bones, hearths and, usually well inside the caves, rock paintings which may have had ritual or magical significance.