Edison's greatest triumph: an electric light made by him remains alight for 40 hours. 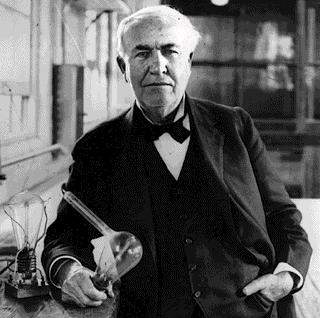 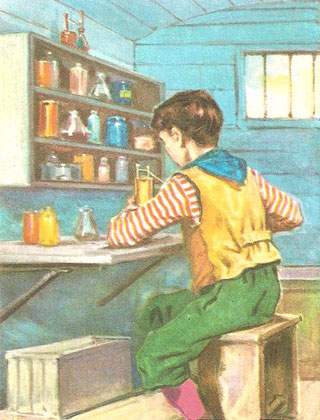 Thomas Edison was an American inventor, probably the greatest of all time, with over 1,300 patents to his name. His first successful invention, an improved stock-ticker (1869), earned him the capital to set up as a manufacturer of telegraphic apparatus. He then developed the duplex method of telegraphy which allow one wire to carry four messages at once. Moving to a new "invention factory" (the first large-scale industrial research laboratory) at Menlo Park, New Jersey, in 1876, he devised the carbon transmitter and a new receiver which made Alexander Graham Bell's telephone commercially practical. His tin-foil phonograph followed in 1877 and in the next year he started to work toward devising a practical incandescent light bulb. By 1879 he had produced the carbon-filament bulb and electric lighting became a reality, though it was not until 1882 that his first public generating station was supplying power to 85 customers in New York.

Moving his laboratories to West Orange, New Jersey, in 1887 he set about devising a motion-picture system (ready by 1889) though he failed to exploit its entertainment potential. In 1892 most of his companies were merged into the General Electric Company (GEC). During World War I Edison worked for the US government on antisubmarine weapons.

In all his career he made only one important scientific discovery, the Edison effect – the ability of electricity to flow from a hot filament in a vacuum lamp to another enclosed wire but not the reverse (1883) – and, because he saw no use for it, he failed to pursue the matter. His success was probably more due to perseverance than any special insight; as he himself said: "Genius is one percent inspiration and ninety-nine percent perspiration."

Edison was born on the February 11, 1847, at Milan, Ohio. His mother was a school teacher; his father had tried his hand at every kind of occupation without succeeding in any of them. As a boy, he was frail, his health always giving cause for anxiety.

From the time he was very small, Thomas had an insatiable curiosity, an intense desire to learn to know about everything. He asked everybody questions all the time, about every subject under the sun; but he made his own inquiries, too, observing nature and the things about him, finding out how things worked, and even dissecting animals for his own information.

In 1854 the family went to settle at Port Heron, Michigan, north-east of Detroit. Here Thomas was sent to the local school, but he only stayed there three months; the schoolteacher was a dry academic kind of man who could make nothing of the boy's lively curiosity. So his mother decided to keep him at home and teach him herself. He learned a great deal from her, but at the same time he was always observing, studying, and analyzing things for himself.

At eleven years of age he set up his first laboratory, in the cellar of the house. A year later he constructed a simple form of telegraph; and not long after this, at the age of twelve, he found his first job, as a 'railway newsboy' – selling newspapers and sweets on the trains running along the Detroit and Port Huron branch of the Grand Trunk Railway.

He did this for over a year. He was so anxious not to waste time that he obtained permission to set up a simple laboratory on the train, and took advantage of all his free time during his journeys to read, carry out experiments, and make notes.

Early in 1861 the Civil War broke out between North and South, and people were impatient to have news of the first battles. Edison immediately thought of a way to take advantage of the situation. His plan was to print a newspaper himself, containing the latest news obtained from the telegraph operators at the various stations.

For $12 he bought an old hand printing press in Detroit and borrowed some paper and set up his printing works in the train. In this way the Grand Trunk Herald was born. It was the first newspaper ever issued from a railway train, and had a circulation of about 400, mostly among railway employees.

It was at this time that Edison had the accident that caused his deafness. He got down from the train in a station to sell papers, and didn't notice that the train had started up again. He ran after it, and a railwayman leaned out from the rear of the platform to pull him in. The boy had his hands full of newspapers, and the only thing the man could do was to drag him in by the ears. A little later Thomas noticed that his hearing was getting weaker; this was the beginning of his lifelong deafness.

A friendly stationmaster, to whom Thomas had done a good turn, repaid him by teaching him telegraphy. Soon he became a capable operator, and in 1862 he obtained the job of night telegraph operator at Mount Clemens, 20 miles from Detroit.

The job might have been made for him, as he worked all night and was able to study or carry out experiments by day. However, in this way he went short of sleep, so he made up for this by inventing an apparatus that would send the signal 'All Well' at regular intervals while he took a short nap.

Unfortunately, he was found out one night and, of course, sacked.

He now became a 'tramp operator', wandering from city to city and picking up jobs where he could. He was known to be a very proficient operator, but, all the same, this was a very hard time for him.

All this time, despite his hardships, Edison was thinking, studying, and experimenting. In 1868, when he was in Boston, he took out a patent for an electrical vote recorder. The following year he drifted to New York, where, after a further time of poverty, he was taken on at a stock exchange telegraph agency. All his spare time was given to experimenting; he developed improvements to stock tickers, and invented duplex and quadruplex telegraph systems by which several messages could be sent at once over a single wire.

He was granted several patents on his inventions. One of these was for a telegraph apparatus suitable for sending out stock exchange news. He offered this to the president of a stock exchange company, hoping to get $3,000 for it. The president thought highly of Edison's device, and asked how much he wanted for it.

'How much would you give me?' Edison asked.

Edison was stupefied. This was a fortune in those days. With the money he set up an engineering laboratory in Newark, New Jersey.

In 1876 he set up his laboratory at Menlo Park, New Jersey. From there, and later from West Orange, N.J. – where he moved in 1887 – came an incessant stream of new inventions.


The magician of Menlo Park

Fame and fortune now came rapidly to the inventor. His work ranged over an immense field. He invented a machine which was later developed into the Remington typewriter; and an electric pen which developed into the mimeograph, for the multiplication of typewriting. Another invention was the carbon transmitter, which helped to bring the Bell telephone into practical use.

Most inventions and new discoveries are the work of many minds, but in one invention Edison had no predecessor. This was the gramophone,or phonograph, which appeared in 1877.

In the same year he began work on his other major task, the incandescent electric lamp. This cost him two years of ceaseless toil, during which time over $40,000 were spent on fruitless experiments. Edison was wholly absorbed by this problem and would pay no attention to anybody or anything else while he was engaged on it. He would work furiously all day, and when his workmen went home in the evening he would go on far into the night, with a few helpers. When they want home at dawn, worn out, Edison would push aside the batteries on the table, rest his head on a couple of books and sleep for two or three hours until the workmen came, when he would start again.

His problem was to find a filament for his lamp that would be 'incandescent', or glow, when current was passed through it, without burning out. He tried out an immense number of materials, even including hairs from the beard of one of his coworkers. Platinum wires, cotton, paper, vegetable fibres – in all he tried out some 6,000 types of filament. At last, on October 21,1879, a lamp in which he had used a filament of carbonized cotton thread glowed in its vacuum for 40 hours. It was a triumph. By 1882 a district in the center of New York was lighted with Edison lamps.

For 49 more years Edison worked with incredible energy. It was an observation of his – the 'Edison effect' – that lead to the invention of the thermionic valve. Another device made possible the first motion-picture camera. He invented the alkaline storage battery. In all he took out more than 1,200 patents. – He died on the October 18, 1931, mourned by the whole town. Yet he was modest about his own gifts, as his most famous remark about genius being mostly a matter of hard work shows.